This is a four part article series that covers the material I presented in a webcast for MSDynamicsWorld.com on May 22nd, 2014. You can find the live recording as well as the slides from an earlier blog post. If you haven’t yet watched the video or didn’t attend the live webcast, then you’ll find all the same information from this website in a written format, which might make it easier to digest, depending on your content consumption preferences.

Before we discuss the latest trends and new features of CRM 2013, let’s take a trip back in time and have a look at the history of the Microsoft Dynamics CRM platform. This will lay down the starting point for the evolution that has lead us into where we are now and hopefully also reveal some new information about the origins of the different features that make up the platform today, as I’m sure only a few of you will have had first hand experience on the earliest versions of the product.

This is what I’ve labelled as the “first chapter” of Microsoft Dynamics CRM. Covering four different major version releases between the years 2003 and 2011:

The first version of Microsoft CRM released in 2003 was strictly a Customer Relationship Management application focused on salesforce automation and service case management. Given the market share of MS’s Office package, the Outlook integration was naturally one of the first differentiators used to gain attention for this new CRM product, and it already included an offline synchronization feature at that time. The customization capabilities of CRM 1.0 were quite limited, with many consultants ending up either creatively repurposing the predefined entities to meet the customer’s business specific requirements, or worse, performing modifications to the application that would later cause problems when upgrading.

There never was a “v2” of MS CRM, rather this release was cancelled and the product team proceeded with directly launching version 3.0 instead in late 2005. This laid out the core end-user feature set of CRM for many years to come, with the addition of a Marketing module alongside Sales and Service. The UI also found its now familiar format with the menu and form layouts. The real breakthrough feature of CRM 3.0 was the support for custom entities, which pretty much meant that the sky was the limit for the custom data model that you could develop with the application now. This marked the start of the XRM journey, with Dynamics CRM being presented as a platform for building your own line of business applications that didn’t necessarily have anything to do with Customer Relationship Management.

Version 4.0 in 2007 introduced many significant changes on the platform side that didn’t necessarily show up as features to the end user. While multi-language and multi-currency support were important for making Dynamics CRM a viable option for larger customers, multi-tenancy was the feature that opened up the doors for whole new delivery models of CRM. It was initially offered via traditional hosting partners and later on by Microsoft via their own CRM Online cloud service that launched in 2008 in North America. Other notable changes in this version included new technologies for building workflows and developing plugins, previously referred to as callouts.

While version 4.0 didn’t look too different from 3.0, the release of CRM 2011 brought in a wealth of new components for the user interface. Visualizing the data no longer required running separate reports, instead there were now interactive charts that could be shown in views, forms or compiled into attractive dashboards. Another key change was the introduction of the Ribbon menu format, which had earlier appeared in the Office 2007 product family. When you add into this package the brand new Outlook client developed by the Outlook product team, CRM 2011 certainly appeared to contain much more “bang for the buck” for the end user. At the same time, the system customizers and developers were introduced to the new solution model that provided a mechanism for managing multiple solution packages from several different solution vendors inside the same CRM organization without them interfering with one another (at least in theory). This was a critical platform capability needed for pursuing the “app store” vision where a customer could pick & mix functionality from a marketplace of solutions, instead of being dependent on a single partner to configure the CRM platform to the customer’s needs.

From Evolution to Revolution?

Thinking back about this first chapter of releases between the years 2003 and 2011, it really could be considered quite a steady evolution of the platform’s capabilities. This was evident in the approach how with each version there were quite many new features added alongside the existing features, to build up a package that was better able to cover the needs of larger organizations with more diverse requirements for their CRM software. The platform components that were originally more CRM specific were replaced with technologies that were better aligned with the big picture of the Microsoft stack, such as SQL Server Reporting Services, Active Directory Federation Services.

The previous version, CRM 2011, was really the peak of this evolutionary path. There was quite a remarkable number of features packaged into the software product that still largely behaved like the version 3.0 product from five years earlier. Upgrading from one version to another seemed to always offer you “more of everything”, while still retaining a reasonable level of backward compatibility to the customizations that had been applied in the growing number of customer organizations.

Instead of just continuing on this path and releasing a new CRM 2013 version with “even more of everything”, Microsoft decided that it was time to step back a bit and evaluate the course of the Dynamics CRM product before this next release. As we’ll come to see later on in the presentation, CRM 2013 is a release that changes a number of things, and also takes away a few previously available options, instead of just adding more ingredients into the stew. I personally consider these changes to be significant enough to call it a paradigm shift that has essentially started the next chapter for Dynamics CRM.

Let’s have a look at some of the evidence available to back this claim up.

Looking at the user interface changes in 2 popular CRM products over the past 7 years illustrates the fact that Dynamics CRM has taken quite a considerable leap in terms of the user experience. 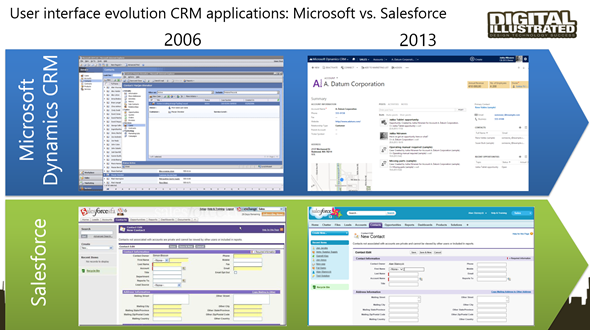 If you deployed MS CRM 3.0 back in 2006 and have since then upgraded your environment via the subsequent releases to CRM 2013, your application will look very different today than it did when you originally started your CRM journey. This is illustrated on the blue arrow on top, showing the UI design for Microsoft’s CRM product.

Major redesigns like this are not something that you can take for granted when it comes to business applications. As an example, Salesforce has chosen a different path with their product and, at least on the surface, remained quite closely on the evolutionary path rather than trying to “re-imagine” what a CRM suite should look like. The green arrow on the bottom illustrates the development of this competing product’s UI. Now, this doesn’t of course mean that their product would have fallen behind the latest trends or that it would not deliver a satisfactory user experience in the year 2014.

I would guess that one of the key reasons why Salesforce has adopted the practice of gradually evolving their application’s feature set and UI is the fact that they’ve been able to leverage the advantages of the cloud delivery model for a much longer time period than Microsoft. Since there has never been a constraint that would have forced them to ship a new major version every 3 years, the logical choice has simply been to avoid upsetting their customer base with major paradigm shifts in the business application that they use for the day-to-day management of their sales pipelines. When you can roll out incremental improvements to your product several times a year, this strategy sure sounds like a much safer choice than throwing an “everything’s different now” type of a release out there and seeing how the customers will react.

With Dynamics CRM 2013, Microsoft has however chosen to take a different approach and deliver an update that certainly won’t go unnoticed. We’ll explore the reasons behind this and the end results as we proceed further in this article series.

CRM design principles: then and now

During the recent years, there has been an increasing emphasis placed on the usability requirements for applications. With the trends for a “mobile first” design principle in developing software, as well as the “consumerization of IT” that has brought personal iPads and shadow cloud applications into the workplace, it may seem like the value of ease of use in computer applications would be a somewhat recent discovery.

If we look at the design principles for the very first version of Microsoft CRM from 10 years ago, then compare it to the CRM 2013 design manifesto, we can find a lot of similarities between the two. Both of the emphasize the importance of simplicity in the design of a CRM application, which is quite an understandable goal, given the general consensus of how confusing enterprise software typically is perceived by the end users.

The fact is that no one ever sets out to build an intentionally complex application, but that’s still where the path may eventually lead to, as more and more features accumulate over time. If you start with a simple business application aimed for managing accounts, contacts, leads, opportunities and activities related to them, one day you may wake up and realize you have a software platform in your hands with a hundred buttons for the user to click on and alien terminology like “rollup queries” shown to them in the standard application navigation.

This is basically where Dynamics CRM had ended up during the first chapter of its existence, by following the evolutionary path. It had accumulated a wealth of features to tick all the right boxes in the functional requirements specifications from customers, as well as an extensive SDK and customization tools for Microsoft partners to deliver tailored solutions built on top of this application platform. In the right hands it was indeed quite a formidable toolkit for building a customer relationship application to suit the needs of various different types of organizations in different industries.

There was still something missing from the equation, and that issue is highlighted by the last of the five design pillars of CRM 2013 shown above. There just wasn’t enough “love” from the users. The experience that they had when working with the application just wasn’t living up to their expectations anymore. Sure, the underlying platform made it possible to deliver a multitude of highly specific XRM solutions to address any sort of niche business process requirements that organizations might have, but the problem wasn’t with the business process owners or top management. The problem simply was that the users had grown accustomed to a better user experience with their own devices and own apps that they had selected, and when compared to these, the CRM application chosen by their employer just wasn’t up to these same standards anymore.