In the first part of this article series we took a look at the history of Microsoft Dynamics CRM as a product and how its evolutionary path from version 1.0 in 2003 to CRM 2011 had lead to the closing of the first chapter of Dynamics CRM and the beginning of a new era with CRM 2013. Next we’ll move on to discuss the effects that mobile computing has had on Dynamics CRM.

Mobile CRM concept: then and now

Mobile computing is not a very recent concept. The first mass production smartphone, Nokia Communicator, was released in 1996 – almost 20 years ago. Around this time, Microsoft was busy developing the Pocket PC variant of its Windows OS to cater for the range of devices that resembled traditional notebooks with their stylus driven user interfaces. As we can see from the image on the left, the target seemed to be making the mobile devices an applications it as close to a full PC equivalent as possible. 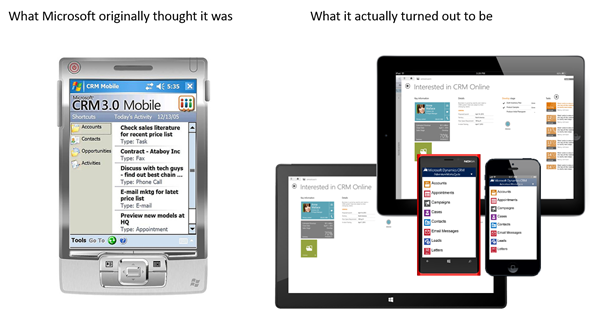 It took until the year 2008 that the world realized this wasn’t going to be the format of mobile computing that we would eventually adopt to be a part of our everyday life. When Apple’s App Store opened up for the iPhone that year, the concept of what a CRM application for smartphones should look like and how it should behave was essentially redefined at that moment. Now, considering the traditional three year release cycle of enterprise software, in the year 2008 Microsoft had just delivered CRM 4.0 into the market and they must have been pretty far in defining the scope of the CRM 2011 release already. This meant they wouldn’t exactly be the first ones to be riding on this new wave of mobility when it comes to CRM apps.

With no modern smartphone apps available from Microsoft themselves, the ISV’s naturally rushed to fill this gap and introduced a variety of mobile CRM products that made it possible to access Dynamics CRM data on a modern touch screen device. At one point the Microsoft Dynamics product team already announced that they would incorporate one of these ISV products into their core offering by branding it as an official Microsoft solution for mobile CRM. These plans were however later scrapped and Microsoft revealed that it had decided to build the required mobile clients in-house rather than acquire the technology from a third party.

The CRM 2013 release eventually introduced the official Mobile CRM apps from Microsoft. In addition to the Windows Phone and Windows 8 operating systems, there’s now solutions also for other popular mobile platforms. Let’s have a look at the current client matrix in more detail and see what this new landscape means for the CRM customizer.

The web client is most often referred to when discussing the re-imagined user experience of CRM 2013. With the cross-browser support introduced slightly ahead of this release, it is the most widely available client type, supporting the vast majority of browsers and platforms out there in the world of traditional computing. The new form layout makes good use of the wider screen resolutions, especially with the new tile based navigation bar having been moved to the top of the page.

Even in the age of mobile computing a great big portion of the CRM end users will still be working with a PC that has Microsoft Outlook installed for email messaging and calendar management. The CRM Outlook client has been a key selling point for Dynamics CRM since day one and it remains a critical component of the platform still today. However, you’ll notice that the traditional menus of the CRM Outlook client are now quite different from the web client experience that CRM 2013 delivers.

While there are also hints of a tile based UI present in the web client, the real touch optimized CRM user experience is delivered with the CRM for Tablets app. Despite of looking very much like a Windows 8 specific application, you can actually get an almost identical client for the Apple iPad and also selected Android tablets in the coming release.

Another touch based experience can be found in the pocket sized Microsoft Dynamics CRM Mobile app that’s available for the top 3 smartphone platforms, which are Android, iOS and Windows Phone. Compared to the CRM for Tablets app designed for a horizontal view of tiles and lists, the Mobile app is optimized to fit vertical screens as small as 3.5”. The feature set found in the smartphone version is much more limited than in the three other client types, with the focus being on quick viewing of data and some lightweight editing.

All of these four client types are available to the licensed Dynamics CRM user with no additional costs tied to the type of device being used. The tablet and phone applications will require an Internet Facing Deployment for the CRM server environment for external access from the public Internet, or CRM Online.

Let’s explore the differences between these client types to better understand what this selection of possible access methods means to the CRM system customizer.

As mentioned, most of the attention will typically be given to the web client UI when designing a Dynamics CRM solution. Alongside the new global Navigation Bar, a significant change to the familiar Dynamics CRM usage patterns is that the application works in a single browser window instead of popup windows for each record. You will still occasionally run into menus that open up into separate window, though. The record forms also have a new default layout of three columns, providing much more information on the screen without the need to scroll further down the form.

In the Outlook client the navigation pattern has not changed, so it remains to a large extent identical to the CRM 2011 structure. It still behaves like a native module within Outlook, presenting the CRM records and actions in a similar fashion as the email records and their related tools. The sitemap is presented as a folder based hierarchy instead of a navigation bar at the top like in the web client. Also the views look and behave the way the did in CRM 2011, but once you click open a record, you’ll get a popup window that looks almost identical to the new web client’s form. You’ll be able to navigate to related child records from there, but a global navigation with the top level areas will not be presented. In the main window you’ll also see the CRM Ribbon in its familiar format, whereas on the record detail windows the new slimmed down version known as the Command Bar is used. One new CRM 2013 feature that is missing from the Outlook client is the Global Quick Create button.

The CRM for Tablets app is a brand new client that has very little in common with the old CRM 2011 user interface. Although the UI components are specific to the Tablet app, the really interesting thing is that the underlying entity forms are actually the same as they are in the web and Outlook clients. This similarity covers only the form definition like fields and sections, though, as the presentation of the record data is completely different. The contents of the form is rendered with a set of rules that have been designed to work in the sideways scrolling, touch optimized user interface. Despite of this, not all of the standard form features are supported in the Tablet app, the most notable limitation being the lack of support for custom HTML web resources or iFrames. There is support for Javascript, though, with some limitations on available functions, and you’re free to leverage the new Business Rules feature of CRM 2013 to build client side business logic without custom code. Contrary to the Outlook client, here the Quick Create forms are actually enforced as the only way to input new records, which does make sense given the more restricted ability to enter large quantities of text without a physical keyboard.

The CRM Mobile app for smartphones is actually a direct evolution from the CRM Mobile Express client, which was and is a lightweight browser client for working with CRM records. The form definitions here are based on the already previously available mobile forms for entities, with a completely different form editor experience in the CRM customization menus. Due to the constraints of the smartphone screen, the forms are a simple single column representation of the records with the absolute bare minimum number of CRM features available. For example, you cannot add any custom commands onto the Command Bar here to execute business processes, nor is there any support for custom scripts or Business Rules.

The key takeaway from this CRM 2013 clients review is that when you are designing your solution, you must consider each of the clients that the end users may use to access it. Differences in how a user will navigate between records or entities can have a significant impact on the usability of a solution that seemed to work just great when accessed via the browser client during development stage. The limitations of form features available on tablets and smartphones can force you to implement more functionality on the server side than you originally thought. Be aware of the cost that these variations bring along.

Even though CRM 2013 has introduced the ability to synchronize emails, appointments, tasks and contacts between CRM and Exchange on the server side instead of the Outlook client, don’t assume that you no longer need the CRM Outlook client. Synchronization is actually a different concept than tracking, as it only deals with the replicating information that’s already in the CRM database. A very common use case is the tracking of new emails created or received in Outlook in the user’s personal mailbox. This is still only available on a Windows PC running Microsoft Outlook and the CRM Outlook client. So, even though the new navigation paradigm of CRM 2013 may appear much more consistent and attractive in the web client, very often you cannot exclude the usage of the CRM Outlook client in your implementation due to the activity tracking requirement.

The tablet app opens up a very compelling scenario of delivering a simple, easy to approach version of CRM on the devices that many mobile workers prefer to carry around instead of their heavy laptops. The fact that the CRM for Tablets app uses the very same form definitions as the web and Outlook client means you don’t need to design your forms twice – but it also means that you can’t. Unsupported components will simply be left out, which is something you’ll need to take into consideration when developing custom scripts for forms that may be accessed via both the web and the tablet clients. Longer forms may be cut short due to the limitations of maximum 5 tabs or 75 fields and 10 lists, so you’ll also need to be aware of any Business Rules that depend on fields further down the form. Also features such as Yammer, Activity Feeds, Bing Maps or SharePoint document libraries will be inaccessible on the tablet form.

Knowing that there are certain limitations with the CRM for Tablets app features, it’s good to keep in mind that accessing the full browser client from the tablet device may also be a perfectly viable option. The Command Bar in the tablet app will display a button to “open this record in the browser”, so the user can choose to launch this version to access features not available in the tablet app. Even though it’s not specifically designed for tablet usage, the new CRM 2013 web client is considerably more touch friendly than the earlier versions and the responsive UI tries its best to adapt to the available screen estate.