After performing the basic installation of MS CRM, you will have a system that contains the default entities with all their fields, forms and so on. The next step will be to modify the entity customizations to suit the business needs of the organization. Typically there will be a development and/or test environment where the customizations are first performed, before being imported into the production server. This should be an easy operation through the Import Customizations menu, but sometimes you may end up with a nasty error like this: 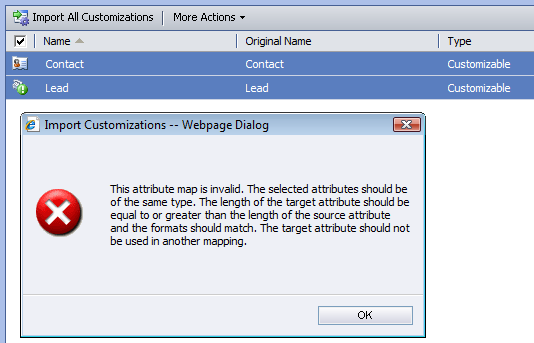 This can happen when the source customization has some default attributes mapped in a different way than what they are by default. As pointed out by Will Willson in this blog post, CRM only adds new mappings between entity attributes during the import. It will not delete any existing mappings, so you may end with the source entity having two mappings pointing to the same field in the target attribute.

If you have a hunch on what entity and which attribute might be causing the problem, the quick solution is to go and remove the existing mapping prior to importing the new customizations. If you’ve got no idea on where the conflict is, you can try enabling CRM Platform Trace, reproducing the error, then opening the resulting trace file that begins with “w3wp-MSCRMServices” and searching for the tag “FAILURE”.

(This issue is described in the confidential Microsoft KB article 921977, available through Customer Source.)