What happens at Convergence rarely stays there. So was the case with Convergence 2014 Europe held this week in (supposedly) sunny Barcelona. There was a flood of #CONV14 tweets shared by the friendly attendees of this conference, which give us quite an accurate picture of what Microsoft’s got in store for the beginning of the year 2015 when it comes to Dynamics CRM and the related products.

Given that the new major version, Dynamics CRM 2015, is scheduled to become available in December, Convergence was naturally the place where this release was to be shown live in action to customers and partners. The actual contents of the release isn’t such a big secret anymore, given that the Release Preview Guide became available already quite some time ago. Although new features like Global Search and Hierarchy Visualization provide some nice looking screens for the demos, there’s also plenty of enhancements buried inside the platform that will make the system customizer’s life easier, like calculated fields and rollup fields.

For anyone wanting to learn in more detail about the upcoming release, Microsoft has made available an unprecedented amount of content on CRM 2015. Check out all the links on this blog post about CRM 2015 prerelease content to keep yourself occupied with Get Ready pages, ebooks and videos for the next week or so.

What wasn’t previously covered in the Preview Guide was how MS plans to take the mobile client capabilities forward with this latest release. At Convergence 2014 Europe we saw a couple of interesting features being demoed on this front. The first was a Windows Phone exclusive, as Microsoft announced the coming integration between Dynamics CRM and Cortana. While this voice guided WP8 digital assistant is currently only available in limited markets and languages, the CRM integration is a fine example of the type of extensibility and the potential that these new types of user interfaces have on our personal mobile devices. 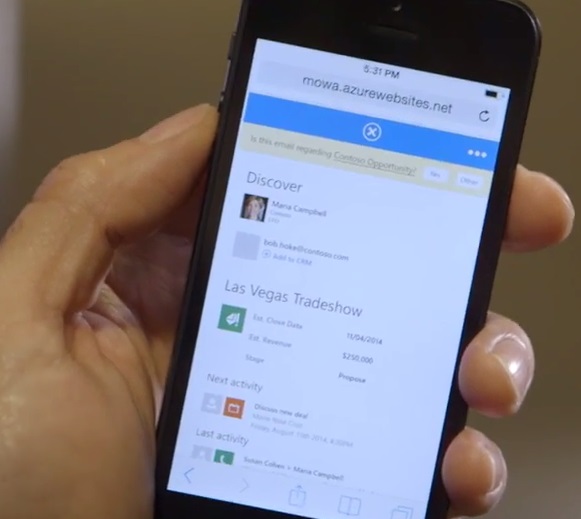 Another far more immediately useful feature that was shown in a demo (and a Youtube video) was the ability to finally track emails from a mobile device into records in CRM. As we know, up until today the only way to select emails to be tracked has been to run a PC with the Outlook client, since CRM activity synchronization options do not cover the use case of promoting new items from you mailbox into CRM. As seen from the image above, the MOWA app (as in Mobile OWA, OWA as in Outlook Web Access) shown at Convergence now promises to deliver a way to do this via your smartphone screen, alongside showing the details about the regarding record such as an opportunity. While you obviously can’t inject a “track” button into the native iPhone email app and the likes, this sure seems like an option worth exploring (at least for Office 365 users) once more details about it become available.

Gone are the days when there was only the Dynamics CRM product in the Dynamics CRM portfolio. As we saw in the US Convergence event this spring, the product roadmap these days consists of four different lanes, with Dynamics Marketing, Social Listening and Parature (the customer service component yet to be re-branded) having their own releases lined up alongside CRM itself.

On the Dynamics Marketing side there has been some catching up to do for the features that didn’t originate from the marketing resource management product (Marketing Pilot) that Microsoft acquired a couple of years ago. While the Mira release this spring was the first version to give us a package with the core marketing automation features for email and web content, the next release (Electra) is starting to look a lot fancier, with advanced features from competing solutions being replicated there (graphical email editors, A/B testing, inbox previews) as well as new areas like the Sales Collaboration Panel (included in CRM Professional license now) and integrated Social Listening data making the MDM product an interesting offering for many existing Dynamics CRM customers. 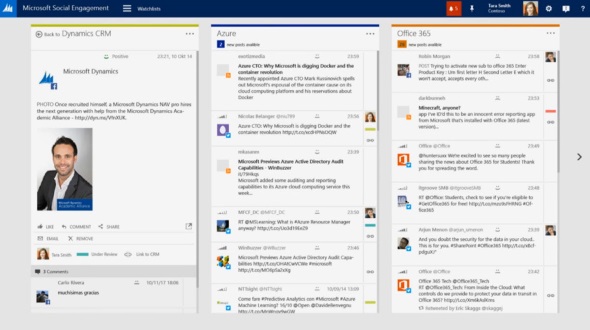 Speaking of the social side, one highly interesting concept that Microsoft demonstrated during the sessions at Convergence was a social tool targeted not only for listening to the data streams from a central tower but also for bringing out this information to a wider range of CRM users. Labelled as “Microsoft Social Engagement” in the demos, this application offered both a dashboard with KPI charts as well as a stream based view for presumably any CRM user who’s interested in following certain topics on the social networks. Whether this is Microsoft’s version of Hootsuite or something completely different remains to be seen, but simply having the social feeds integrated into the CRM UI and then providing a “track in CRM” button for engaging with the people who are having the discussion on these networks seems to make some of the “social looking glass” visions from 3 years ago finally a reality. Definitely something to keep an eye on for 2015.

I won’t even attempt to cover all of the announcements and highlights from Convergence in a blog post. Instead I’m glad to forward you to the source of the information, which is the community contributed content shared from the live sessions over on Twitter. Have a look at my Storify post on Convergence to capture some of the highlights from the event for the Microsoft Dynamics CRM audience:

If you really want to dig down into the details of what was shown at Convergence 2014 Europe, then have a look at the video library that contains all of the session recordings in full length.