It’s the end of another year, which means the blogosphere is filling up with “looking back” type of articles that examine the various topics discussed during the year. Analyzing past actions is activity that we all should probably spend time on a bit more frequently, although one day out of 365 is a good start. Following this pattern, I also ended up having a look back at some of my earlier writings during the Xmas break. 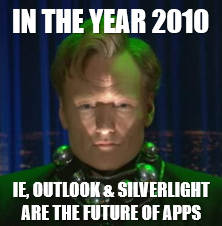 So, how was 2015 for Dynamics CRM? Beats me, because that’s not where I was looking at! Via a seemingly random navigation path that started with me exploring the brand new PowerApps announced by Microsoft a few weeks ago, I actually ended up reading some of my Surviving CRM writings from the year 2010. I’ll perhaps describe the events behind this abrupt jump back in time in a post covering the future of mobile business apps and CRM, but for now that’s not on the agenda. No, instead I found plenty of interesting material covering quite a wide spectrum of CRM related topics that in many ways are as relevant today as they were five years ago.

My journey with Microsoft Dynamics CRM started almost exactly 10 years ago, when the MS CRM 3.0 version with Finnish language support was introduced and my then forward thinking organization decided to adopt this system instead of a proven, industry specific solution tailored for the Nordic markets. I did not start blogging about my experiences right from day one, since back in 2005 that wasn’t how any normal person would behave (today it would be something I’d encourage everyone to consider). As my focus gradually moved away from generic marketing and IT topics into a more tightly defined domain of business applications and the MS ecosystem in particular, more and more material started accumulating on my blog, on Twitter, on SlideShare and so on. By 2010 it looks like I had already sunk pretty deep into these waters, which makes it interesting (at least for myself!) to see how I envisioned the world around Dynamics CRM to evolve.

I picked out a few topics from my 2010 writings and reflected back on what I thought was going to be their impact vs. what we now know five years later. In (mostly) the order of the original blog posts, the themes ended up being the following:

Here’s a presentation that contains excerpts from the original blog posts and some notes 5 years later on the topic:

Luckily I’m not in the habit of making bold, precise predictions like “by year N+2 the market size of technology X will have grown by 300%”, since those are better left for the industry analysts who are paid for such statements. I’m of course completely biased in evaluating how accurately my own writings matched with the future reality, but it’s easy to find a number of observations from there we one could arrogantly say “I told you this was going to happen” and “some things never change, now do they”. What’s not so apparent from looking at past articles are the things that actually did change at a blinding speed.

Just think about it: only five years ago the big new CRM 2011 release was being developed for an “Internet Explorer only” world and the thought of MS favoring competing OS’s in their own apps over Windows would have been simply ludicrous. Getting new CRM versions released every 6 months instead of a 3 year upgrade cycle sounded like something the customers could never cope with, but here we are with CRM Online. Mastering the whole Dynamics CRM product in 2010 was a perfectly realistic goal for consultants, whereas in 2015 you’re not going to find a person who’s fluent in CRM, MDM, MSE, Parature, FieldOne, Adxstudio and the rest of the current MS product stack in this area. All these changes and more mean that a CRM project starting today may not have much in common at all with the one you were working on in 2010.

The future isn’t ever exactly what you would think, but that doesn’t mean you wouldn’t benefit from the effort of trying to project the possible paths forward in your mind. I personally find the best way to build up clarity into your vision on where things are going is spending some time on connecting the dots between what information you’ve just recently acquired and what analysis you’ve performed earlier. It’s all too easy to just launch a news app or log into a social feed and start taking in new announcements of what someone else thinks is noteworthy right now, but those bits & pieces are fairly unlikely to carry significance to you in the long term – unless you’re able to put them into context with the knowledge structures built from prior pieces. That’s why it doesn’t hurt to recap the history of how the technologies you’re working with have evolved over time, when thinking about what might be coming next on the road ahead.