The October ’18 of Microsoft Business Applications is going to bring a whole bunch of exciting features, spread across the huge stack of products and apps that either make up or operate on the Power Platform. Much of them will be specific to an area that only some of the users or developers work with in their specific customer scenarios, but there are also going to be updates that will be visible to practically everyone. Here are some of those new experiences that we can expect to see within the next few months as the features are gradually released.

On the Model-driven App client side, there will be some changes to the navigation features in Unified Interface. Here’s what October ’18 update is going to look like for the end user: 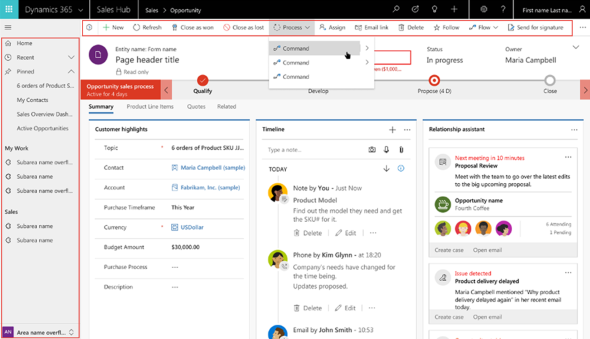 The product team has communicated the following changes:

These are great enhancements that are aimed at making the Unified Interface work more smoothly on the desktop browser specifically. They will not affect the mobile or Mail app, but only the screens that will have a width of 480 or more pixels. It’s awesome to see that even though the clients share the same infrastructure, not everything is forced to work exactly the same way on a big monitor vs. small phone screen.

For existing Dynamics 365 CE customers who are working in the “classic” web client, the question of “can we do this in Unified Interface?” is a critical factor in deciding on the strategy of how to migrate users to the latest experiences available in the cloud. There’s a list of capabilities not yet on Unified Interface over on docs.microsoft.com that should serve as the starting point for any such planning. For a more forward looking list, the Unified Interface roadmap presented at MS Business Applications Summit 2018 is currently the best summary of what to expect: 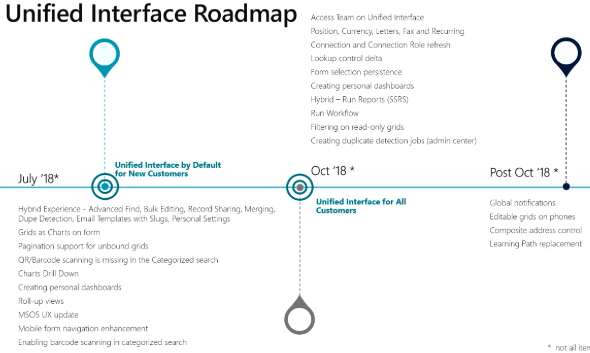 While there will be more and more entities and features natively supported on UCI, not everything from good ol’ Dynamics CRM is going to be rebuilt for the new client infrastructure – at least not yet. When you look at what’s happening on the broader Power Platform side, this prioritization makes a lot of sense, as porting over old UI controls as-is probably doesn’t fit with the long term platform vision. Still, you can’t just pretend that a few missing features like Advanced Find would NOT be critical to business users who’ve built their work processes around these core capabilities of Dynamics 365 CE.

The short term solution will be to offer a “hybrid UI”, in which the controls not yet ported to UCI will be opened up in windows that render the classic web client UI. So, things like merge dialogs, personal settings, SSRS reports and Advanced Find will be accessible to users from within Unified Interface, with the existing feature set that they’ve come to expect in earlier versions. Of course they won’t be mobile friendly like the responsive UCI controls, but desktop users aren’t probably going to care all that much about this anyway.

As we can see in the roadmap presentation, Microsoft aims to make Unified Interface the default experience first for new customers and shortly also to existing environments. There’s no need to panic over this change, though, as the plan is to introduce a “Side by Side” (SxS) option for administrators to define whether the classic web client is visible to users or not. If you have a good reason to not yet push everyone over to Unified Interface, you don’t have to – at least not with the Oct ’18 release.

While the aforementioned changes are mostly relevant to customers who have bought Dynamics 365 Customer Engagement and are using it for either traditional CRM scenarios or more XRM style applications, it’s good to keep in mind that all these investments are actually done in the context of the greater platform. Starting from the July 2018 announcements, Power Platform is now an actual thing that Microsoft sells. To the developers and administrators it has seemed like a collection of separate product boxes of different shapes, but that experience is also about to get unified as the new Power Platform Admin Center is introduced: You can already access this UI from either the short URL admin.dynamics.com or the longer (official) version admin.powerplatform.microsoft.com. Today you don’t yet see too many actual admin screens of individual applications within the Power Platform Admin Center, as the menu items will mostly redirect you to existing admin centers for PowerApps, Flow, Power BI and Dynamics 365 CE. Things are going to change soon, though, as a brand new admin UI will reveal the various Dynamics 365 CE settings that you’ve earlier been able to only access from the classic web client: 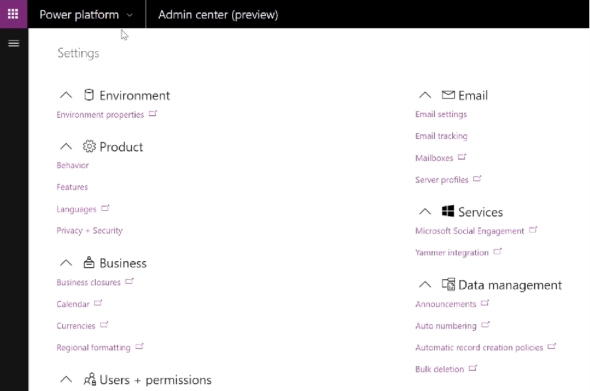 These images are taken from another Business Applications Summit presentation, “Key features coming to Microsoft PowerApps and Dynamics 365 admins”. Just like in the UCI session, there’s a great roadmap slide included that shows the stages via which the new features are planned to be rolled out:

Now, you may not want to look at the detailed dates, since both roadmaps are already ancient history from over a month ago and things aren’t necessarily quite where the initial targets were set. Nevertheless, these are the features and experiences that will soon be out there. If you compare this to the traditional Dynamics CRM world in which many current on-prem customers with their v8.2 (at best) environments are operating in, then it’s in many ways like a whole new application platform to work with. MVP Scott Durow has drawn a great diagram of the new admin experiences in Power Platform that also helps in illustrating the huge shift that is taking place here. We’ve seen architecture diagrams like the one below for a long time now, but once the actual user experience for solution designers also starts to reflect this, I believe that will have a “powerful” impact indeed! 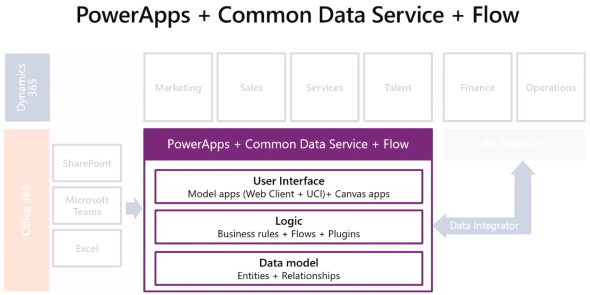