In Part 1 I shared some thoughts and observations on what role cloud computing was playing at Convergence 2010 Atlanta. I also promised to get back on the other hot topic, which should not be a surprise to anyone. No, it’s not XRM. But if we’d follow a similar naming convention, I guess it could be called SocialX, meaning “social anything”.

If the cloud computing movement is about the shift in technology, then the social web revolution is all about the people and their new forms of behaviour. Sure, it’s powered by some tech innovations from Web 2.0, but it would be a stretch to claim that the source code behind services like Facebook or Foursquare contains the magic ingredients that have caused the eruption of the social media volcano. To prove my point, just take a look at the following slide: 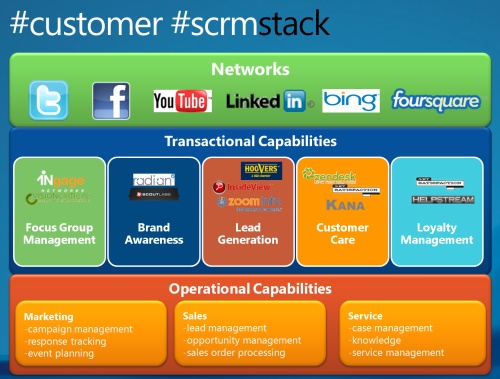 This “social customer stack” is taken from the Deriving Value from Social Networks session by Nikhil Hasija and Paul Greenberg. It was the best 60 minutes spent during Convergence 2010, hands down (even better than The Return at Tabernackle or The Geeks Band at Hard Rock Café). One particularly great thing about it was that there were absolutely no sceenshots of Microsoft applications, like in all other Convergence presentations. No attempts to push products like the Social Media Accelerator or anything else MS branded. Everything was built around the core message: what has changed since the invention of traditional CRM and why the customer is now in charge.

Social CRM is of course not a brand new concept. Having said that, it’s still far from an established or clearly defined concept. The following presentation contains much of the content that Paul was presenting at Convergence, so flicking through these should give you a good idea of the what, why, how of SCRM:

Be sure to also read Paul’s blog post titled “Microsoft Convergence 2010. Finally Getting Rid of the But….?” on ZDNet.

Returning to the social customer stack, it was quite delightful to see that Microsoft has been able to grasp the fact that the future of applications needed for any company to adopt a holistic practice of SCRM activities is not something they alone can engineer by themselves at Redmond. Maybe this can be partially attributed to the phenomena uncovered by the recent study by NetProspex, which found that Microsoft employees were the most social media-savvy in the world. If the company is able to transform this savviness into products and services that encourage coexistence and integration of applications from outside the Microsoft stack, then all those hours wasted by MS employees in reading each other’s Facebook status updates may actually deliver a nice ROI in the long run. Heck, maybe they’ll even survive beyond the looming death of the desktop operating system.

What does it all mean for Dynamics CRM? Well, your guess is as good as mine, but I believe the business applications world will be moving towards the app store model that we’ve seen grow quite popular in the consumer mobile arena. In order to get there, it’s going to require a little bit of work from Microsoft to make this transformation possible, but I see them taking the steps into right direction. With the Solution Management features to be introduced in CRM 5.0 (edit: now branded as Dynamics CRM 2011), the possibilities for creating real application packages that a CRM using organization could easily consume will be at a whole new level. With its Azure platform, Microsoft has a natural expansion tank in place to facilitate the growth of its CRM customers’ solutions to become a network of applications.

Even though it is somewhat disappointing that there doesn’t appear to be any Chatter type of functionality built into the upcoming version of CRM (guess you’ll need to use SharePoint 2010 for that) to foster the social enterprise approach for transparency on CRM customer data, perhaps this isn’t the most important thing Microsoft to focus on. Social CRM will not be a module you can plug into your existing application, it’s about being able to support whatever new methods of communication and collaboration emerge “out there” between companies and their customers. Get the right pieces in there and the ecosystem may just invite you to be a part of the conversation. 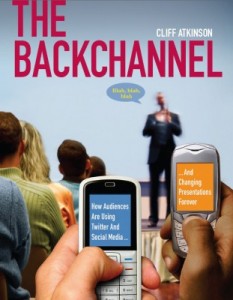 As a final note from Convergence 2010 Atlanta, I want to touch one subject of far less importance than the cloud or the “SocialX” future, but something which relates to them quite closely. If there’s one thing that has changed in conference audience behaviour during the past couple of years, it has to be the explosion of mobile applications for social networks. Yeah, I’m talking about Twitter et al. The backchannel of tweets during the sessions is nowadays something you can expect to take place in any larger tech oriented event. Some people are even writing books about it and building applications targeted to amplify and leverage this phenomena.

I guess Convergence is nowhere near SXSWi in terms of mobile geek penetration rates (just watch this video), but it would have been awfully convenient if Microsoft had provided complimentary WiFi for all attendees, to facilitate the emergence of a proper backchannel. Perhaps the U.S. crowd didn’t have any problems utilizing their data plans, but for an overseas attendee the ridiculous WiFi rates charged by the Georgia World Congress Center for 24h access were a showstopper. Luckily there were plenty of CommNet terminals around, which weren’t locked to browsing only the Convergence site. Tweets thru SMS during the session and a quick review of updates with #CONV10 hashtag during the breaks managed to keep my social network addiction at bay.

Girish Raja showed a cool demo in his Azure themed session about using The Archivist to collect a database of tweets for analyzing trends and other kinds of data mining activities. Perhaps by Convergence 2011 we will hear how Microsoft has managed to make use of the backchannel analytics. I’ll see you in that session then!