Got a Dynamics CRM blog? Like to tweet about all things Microsoft Dynamics? You’re in luck, because Microsoft is providing you a steady supply of topics in the form of CRM Update Rollups (or UR’s if you prefer acronyms). Right now Microsoft Dynamics CRM 4.0 is on level 13 and will certainly continue to receive plenty more until the end of its support lifecycle. In January 2009 Microsoft stated that they aim to release a new update rollup every 8 weeks. If you multiply 13 x 8, that gives you 104 (two years), which means the actual release schedule is even tighter.

When a UR comes out, you’ll be certainly well informed about it through the Dynamics CRM community, as this tends to generate a massive number of blog posts, tweets and retweets in celebration of the event. Having new hotfixes is of course important for anyone working with CRM, but has the whole UR phenomena gotten a little bit out of hand by now? The recent tweet by Jerry Weinstock from CRM Innovation highlights the issue perfectly: 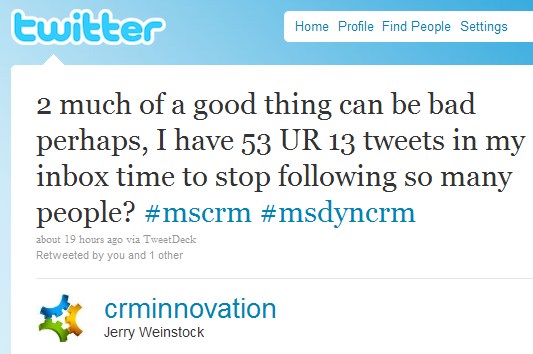 Let’s make one thing clear: there is no newsworthy content in just posting that “Update Rollup X has been released”. Nada. It’s like stating that a new copy of Wired is now available at the news stands.

I’ve seen a countless number of practically abandoned Dynamics CRM blogs where the author no longer has the time or energy to produce original content. Yet they see it as their duty to keep posting UR notifications one after another. Wow, writing a blog has never been so easy! Ok, so you guys may have way more posts than I do, but do you really think you’re contributing to the CRM community in a meaningful way?

I’m not saying that UR’s cannot be meaningful topics for a post, but you absolutely must provide some editorial content of your own, in addition to the KB article cut&paste. Tell about your experiences with the update, what was the reason why a particular hotfix was significant for you, what possible problems the UR installation may cause etc. Say something that not every one of us CRM geeks out there wouldn’t already know through their RSS feeds and Twitter lists.

The amount of great information you can acquire just by following a Twitter hashtag like #MSDYNCRM is truly incredible and I don’t want to play down the value of an active Dynamics CRM community in any way. Quite the contrary, that’s the one thing we should all celebrate. All I’m asking is that the next time you see the news about a new UR, think for a moment how likely it is that all your followers and readers have already received the news through their own channels. And if you RT, at least put a funny twist on it!

As for the UR release process in general, I propose that Microsoft registers the @UpdateRollup account on Twitter and we can all just start following it. Or better yet, replace the old Announcements section inside Dynamics CRM with a dashboard of all the official MS Dynamics CRM tweets in one convenient place. Of course in CRM 2011 we’ll already be able to configure those dashboards ourselves.

Jukka Niiranen #ForwardForever · 11 hours ago
@jukkan
"Encrypted in Finnish 🇫🇮". Still the stongest cryptographic algorithm known to man - and we prefer to keep it that way. https://t.co/MoqT8T85Wa
View on Twitter
Edward Snowden@Snowden
@180cmshort I have secretly been in Finland the whole time. The NSA just hasn't been able to figure it out because none of their cryptographers can decipher Finnish.
0
5