Continuing with the format introduced in 2009, this year’s Microsoft Convergence for the EMEA region was split into three locations: London, Prague and The Hague. Out of all the options, Prague fit our schedules the best, so that became our destination of choice to hear the latest news and buzz around Microsoft Dynamics products.

With the fairly recent release of Dynamics CRM 2011 public beta, there was certainly a lot for Microsoft to present on the CRM front. Having been working with the product since CTP3 already, I wasn’t expecting too many surprises for myself in the CRM 2011 session contents. It’s still interesting to observe what is being said about the new release and how the customers and partners react to it. There is such a wealth of new, important features included in CRM 2011 (see my walkthrough slides for starters) that you can’t really construct the one right pitch for the product. You could say that there’s something for everyone. 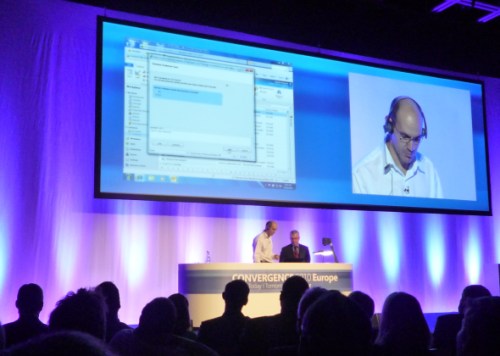 We saw the first glimpse of CRM 2011 during Kirill’s keynote, when Reuben Krippner showed a bit of Process Dialogs in the Dynamic Business demonstration. From there on, Reuben was a busy man, since he was giving demos in the next four consecutive CRM sessions on the agenda. Great job pulling it off, Reuben! Let’s hope Liverpool picks up their pace in the Premier League, so we can see some more of them in future CRM demos 😉 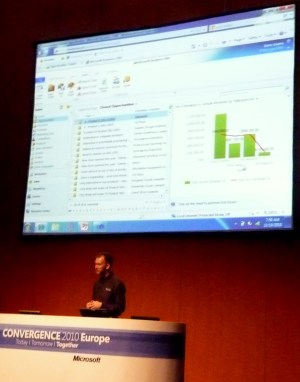 Barry Givens held the last CRM session of the day, focusing on data visualization in CRM 2011. Not like we hadn’t seen the charts a few times already during the day, but hey, I always enjoy hearing Barry talk about his favorite topic i.e. analytics in CRM. While the out-of-the-box charts in CRM 2011 certainly do deliver value, you should really look at the broader picture of what the visualization features introduced in the new version truly mean in terms of customization and application design. The charts are actually one alternative method of navigation, due to their tight integration with grids and the drill-down capability. They can be embedded not only on grids but also forms (through sub-grids), bringing visualizations to every part of the CRM UI. Oh, and don’t forget to check out my post about editing the .NET Chart Controls for CRM 2011. Dashboards, on the other hand, are not just an item in the main menu but rather a new form type. By allowing flexible arrangement of embedded components like grids, charts and web resources, the dashboard forms might actually one day become the next generation UI for navigating in Dynamics CRM. You know, something for the future ahead of us when every modern web app must be built in RIA fashion, with Silverlight controls and what have you.

No matter how nice the new charts look in the demos and screenshots, there’s no denying that the main theme for Convergence 2010 in EMEA was the same as in Atlanta earlier this year. Yes, I’m talking about the cloud, and so is certainly Microsoft, event after Ray Ozzie’s departure from the company. As was noted by many presenters at Convergence, it’s a tough job demonstrating the cloud as a feature, since the web applications will look exactly the same to the end user, regardless of where they are hosted. This didn’t take away the fact that the agenda was simply overwhelmed with cloud related topics. It’s safe to say by now that CRM Online is the default configuration Microsoft has in mind when they are talking about their products, and I wouldn’t be surprised if more and more of the new features will be introduced first in the Online version, then later for on-premises (if at all). The power of choice is still there, but the preferred option has shifted faster than you might have imagined. 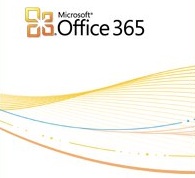 I didn’t read about it until browsing my Twitter feeds during the cab ride back from the airport, but Microsoft went out and announced Office 365 during the same day as Convergence Prague took place. If there was any metion of it in the event, I surely missed it, but it’s more likely that the Microsoft considered this to be something not falling directly under its Dynamics product line and therefore no need to integrate it into their Convergence story. Nevertheless, the announcement has big implications on the future of Dynamics CRM, since it has been announced that CRM Online will be added into the Office 365 service portfolio in 2011.

In the early days of Windows Azure press releases, the concepts of Dynamics CRM Services and SharePoint Services were presented as a future part of the Azure platform. We all know that the contents of Azure today is a bit different from those planned features. SharePoint has been taken into the cloud as a part of BPOS and CRM Online has enjoyed success as an independent product. When CRM will now be finding a home as a part of BPOS 2.0 a.k.a. Microsoft Office 365, it’s starting to clearly look like this will be how Microsoft is aligning it’s two business application development platforms. Not as a generic service available to 3rd party cloud app developers but rather as the foundation of basic information worker infrastructure provided to all businesses operating in the MS Office world.

Salesforce.com will most likely continue to be the main rival to Dynamics CRM, as proven by Microsoft’s recent www.dontgetforced.com campaign. Comparison of the pricing of the two CRM applications already proves how Microsoft has been aggressive in trying to undercut SFDC. At Convergence 2010 EMEA this gap was further widened by Microsoft’s promotional pricing for CRM Online, which now puts the price point at $34 / €31 per user per month for the first year (hmm, the real USD/EUR exchange rate would put it at €24, but that’s the premium us Europeans so often get to pay). Now, consider that the price of Office 365 Enterprise edition with Exchange, Lync and SharePoint will be $24 / €22.75 when launched. Once the Office 365 service offering will be extended to cover also Dynamics CRM, do you think the price for this “Ultimate edition” will be $24 Office + $34 CRM? Of course it won’t, so the question really is (in the famous words of Chuck D), how low can you go? I’m not going to speculate a future price tag, but the message to the Dynamics CRM ecosystem is clear: CRM is becoming an everyday office application, it’s getting cheaper and easier to purchase and most typically it will be served from the cloud. Now go and plan you own strategy accordingly. 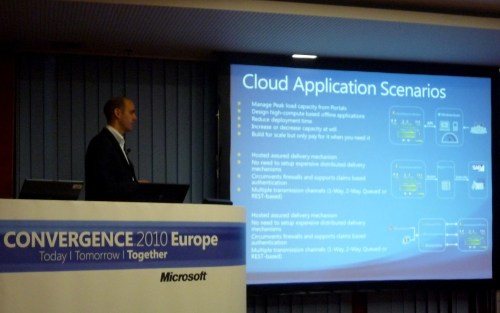 I did also attend one Dynamics NAV session, to get a glimpse of what the guys on the other side are talking about. Considering that Microsoft CRM has been a pure web application starting from version 1.0 in 2003, you sometimes forget how big of an advantage this is over some older applications that weren’t born into the web era. The NAV Software Plus Service Strategy session did of course promote how the application can be moved towards the cloud with the help of hosting partners. At the same time, hearing talks about how they’re now moving the last remaining business logic from the client side to the server, or how the number of concurrent NAV users was recommended to be less than ten, this all made it quite clear why the Dynamics CRM Online offering is so much further up in the clouds already than Microsoft’s ERP offering. Oh well, at lest NAV 2009 R2 is promised to have built-in integration to CRM.

Just like in Convergence 2010 Atlanta, also the Prague event venue disappointed me by not offering a free WiFi network  for the conference attendees to use on their mobiles or laptops. I simply cannot comprehend why we still need to be struggling with such basic infrastructure requirements in the year 2010. I’d gladly pay 10 euros more for the ticket if it included a no-hassle access right to high quality wireless network for the duration of the conference. Acquiring hotel vouchers for WiFi feels almost like asking for your credit card details to get to the men’s room. The contrast between the “all in” cloud evangelism presented in Microsoft’s sessions and the reality that awaits the attendees when they step into the expo lounge should ring some bells in someone’s head. From what I heard, also the exhibitor stands were struggling with connectivity issues.

As a result of not being connected during the event, I didn’t even bother trying to contribute into building a Twitter backchannel for the #CONV10 hashtag. One directional, SMS based status updates are hardly what it’s about, the whole point would have been in seeing what others were posting about the event and the session contents. This worked quite nicely during the US Convergence, which can probably be attributed to A) higher Twitter penetration and B) more local attendees with a working mobile data plan in Atlanta. Even though we all live in one big EU over here, mobile roaming with reasonable data charges is still merely a distant dream in Europe. No wonder the mobile apps market and innovation have shifted so heavily towards the States during the past few years. 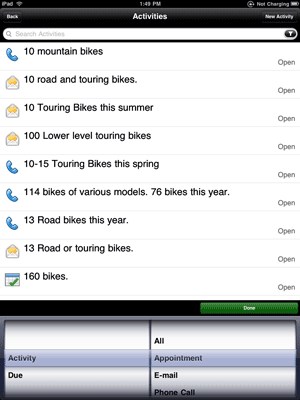 Speaking of which, the first Windows Phone 7 devices were announced the week before Convergence, but we didn’t get to see much of them in action yet. While WP7 did allow the Redmond crowd to again make jokes about “that inferior mobile device” (no, not the one starting with W but the one with i…), the only live application I remember seeing run WP7 OS was the keynote demo of a custom app consisting of a flashy quantity scroller to adjust CRM (or was it the ERP) integer field values. As there’s no announcements of any official new mobile clients for CRM 2011, it will most likely be up to the ISV’s to leverage WP7 in their applications. Having said that, on the expo floor there was quite a number of  of iPads being used in product demonstrations and I don’t see these getting replaced with your standard HTC running Windows Phone anytime soon…

(Stop the press: Microsoft has said there will be integration between Windows Phone 7 and CRM Online. More details expected at the WP7 SMB launch events.)

Next April will again see the Convergence 2011 take place in Atlanta. If you ask me, I think the one day events arranged in EMEA offer only a “Convergence Lite” experience, which doesn’t really give enough room in the session agenda to go deeper into specific topics of interest, let alone to have more technical discussions. While the Dynamics CRM blogosphere, forums and tweeps do a great job in passing on information and facilitating discussions, there’s no way you can beat the real live events. Therefore, if you’re in the process of planning your travel budget for next year, be sure to include one trip to Atlanta in there.