One great thing about Microsoft Dynamics CRM as a business application platform has been that it’s modern enough to have been born into the browser window from day one. With no legacy from the pre-web era, the product has been able to stay relevant with no major disruptions in the client side development and also supported the eventual move of the server side functionality to the data centers in the cloud. 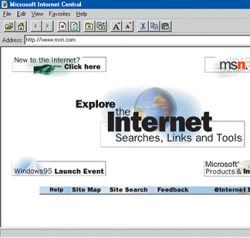 Internet Explorer market share peaked in 2003, when 95% of all Internet usage was on IE. Coincidentally, Microsoft CRM 1.0 was released in January 2003. At the time, providing support for any other browser than your in-house product would have certainly sounded like a requirement you could de-prioritize. Today Internet Explorer commands a market share of less than 40%. There are now more iPads sold than any brand of desktop PCs combined. If that doesn’t signal the move to a post-PC era, I don’t know what does. If you’d be a company manufacturing an IE only product for PCs in the year 2012, you could soon be out of business.

This is a fate Microsoft intends to avoid, which is why the cross-browser support for Microsoft Dynamics CRM was officially announced in the Q2 2012 Service Update release preview guide, released at the beginning of Extreme CRM 2012 conference in Berlin. We had already seen the promise of non-IE browser clients for Dynamics CRM presented in Microsoft’s May 2011 Statement of Direction and now we finally have details about what to expect in Dynamics CRM R8 release exactly one year later. As with my previous post on mobile CRM, I won’t rephrase all the content of the official announcement but I’ll rather try and reflect on the topic with some personal observations and thoughts.

There’s Supported and then there’s “supported”

If you’ve glanced at the table of supported browser and OS combinations, you’ll have noticed that Microsoft does not guarantee support on every browser out there on every operating system. This is not too surprising, as any web application developer surely knows what a nightmare the differences in interpretation of web standards between various browsers can be for application development and testing. In the words of Craig Dewar (Director of Product Management for MSDYNCRM), browser testing is a “gigantic effort” for Microsoft, which is why official support is not all encompassing.

Just because a browser or OS is not listed in Microsoft’s documentation as supported, doesn’t mean Dynamics CRM won’t work on it. So, even though there are no supported options for using Microsoft Dynamics CRM on Linux, you might not notice any problems if you access it with Firefox on Ubuntu. In fact, Craig mentioned in his keynote at Extreme CRM 2012 Berlin that even if you’re using a client that’s not officially supported, Microsoft will allow you to open support tickets on issues that are not specific to the browser/OS combination you’re running. I guess you’ll just want to have at least one Win/IE or Mac/Safari device around to make sure you can reproduce the issue when dealing with Microsoft Support representatives.

In case you’ve been drooling over the cool Apple hardware that all the opinion leaders seem to carry with them these days, the future does indeed look brighter for people working on/with Dynamics CRM. Before you jump head first into the OSX & iOS world and format all your Windows partitions, it’s important to remember that what Microsoft is talking about here is just the browser client support for CRM end users. 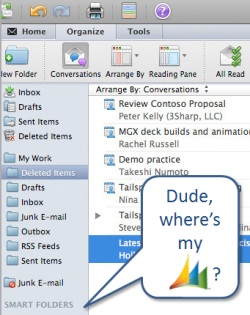 While you can get Microsoft Office for OSX and run Outlook on you Mac, what you can’t do is use the Microsoft Dynamics CRM for Outlook client. This means you can’t track emails to CRM, synchronize your calendar appointments between Outlook and CRM, get CRM task and call reminders from your Outlook, synchronize your contacts from CRM to Outlook to your iPhone, or have any offline support for CRM data and application functionality when your Macbook doesn’t have WiFi or 3G data connectivity. All in all, you lose quite a bit of that seamless productivity tools magic that Dynamics CRM promises to deliver for all Windows users. I haven’t seen any announcements about a CRM Outlook client for Mac, so it’s pretty safe to assume that we won’t see one released for the Outlook 2011 for Mac version currently available.

OK, so how about the support of Apple’s mobile devices then? It says Dynamics CRM will run on iPad 2 with iOS 5.x, so that should at least deliver the full flavor of the browser experience on a tablet, right? Well, the problem is you might get more than you bargained for in that deal, since (as far as I’m aware of) the browser client will look and work exactly the same on all supported platforms and devices. If you’ve ever tried running the Dynamics CRM web client on a Windows 7 tablet, you’ll know that simply replacing the mouse cursor with your index finger will not magically “touchify” the user experience. What works nicely on a 24″ screen with mouse & keyboard input may not scale/transform into the tablet environment of 10″ screens and touch UI. If you’ve used a remote desktop app on your iPad, then I’d imagine this is pretty much what you can expect from a browser client on an iPad. Unless you go for the $30 per month subscription of Microsoft Dynamics CRM Mobile app or purchase a perpetual license from CWR Mobility, TenDigits or other ISV’s that develop mobile clients optimized specifically for the touch UI. The same goes for Android tablets, only with the exception that the browser client falls into the “not officially supported” territory.

Finally, if you’re not only using Dynamics CRM but also administering or customizing it, I’ve read that you’ll still need Internet Explorer in order to access these areas in the web client. 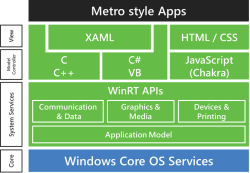 It’s important to note that the web client coming out in Q2 2012 is not a HTML5 product, rather it’s a trimmed version of the previous IE only client with removed dependencies on Microsoft’s proprietary extensions that only IE supports (.htc files etc.). The future is not here yet, but there is little doubt on the direction Microsoft is heading towards, with the upcoming WinRT framework and the big push for HTML, Javascript and CSS as the foundation for future Windows apps.

Which brings us to Silverlight. It’s been widely speculated that Silverlight 5 released at the end of 2011 will be the last of it’s kind, the end of the road. Porting existing Silverlight apps to run on Win RT is said to be easy, which should naturally be in the interest of Microsoft to ensure. As I’m not a developer, I’m looking at the discussion more from the point of view of someone who needs to examine all the available technologies out there, evaluate how they fit together and build a working business solution out of them. From this perspective, there are some concerns regarding Silverlight that very much affect Dynamics CRM users as well.

While Dynamics CRM might work on a browser/OS combination that is not officially supported, the game is different if you’re using Silverlight web parts in your CRM. If a Silverlight plugin is not available for the client, it will not work, period. This includes combinations such as Chrome/OSX, any machine running Linux and most notably the iPad. Ok, so what about making the same UI with a different technology, like HTML, Javascript and CSS? In theory everything should work on every platform in this case. You’re free to draw your conclusions on which approach is better for starting your next Dynamics CRM add-on project.

Looking further ahead to Windows 8, we’ve already received the announcement that there will actually be a completely different edition of the operating system, called Windows On ARM (WOA), that will the basis for building always on, always connected, low power consumption devices to rival the iPad. The Internet Explorer 10 browser on WOA will not allow any plug-ins whatsoever, be it Flash or Silverlight. Furthermore, the Office 15 package that is available for WOA tablets will include only Word, Excel, PowerPoint and OneNote, but not Outlook. By now you should have figured out that the Microsoft Dynamics CRM experience on WOA will need to be quite different from what we have on Windows 7 today. 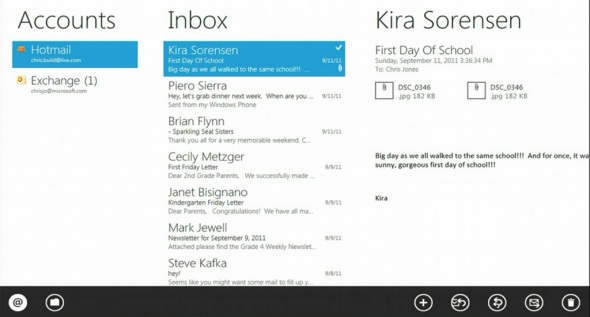 If there will not be Outlook on the “real” Windows tablets, what does the future hold for the CRM Outlook client? I previously wrote about the legacy of Outlook and how it will be increasingly more difficult to carry all that legacy when moving to the Post-PC era of iPad-esque devices for every knowledge worker. By the looks of things, Outlook could possibly get split into Metro Mail, Contacts and Calendar apps. If this happens, then it’s easy to envision a separate Dynamics CRM Metro app sitting alongside them, integrating into all the other installed apps through a simple share contract. After all, isn’t that the way it should really be? Link contacts/friends/followers from any social network app to CRM contacts, track any type of status update/post/tweet from the same app as a custom activity type into your CRM database. There’s no reason why customer relationship management tasks should be any more complex or inflexible than that.

It’s great to have Dynamics CRM available soon on (almost) any browser. Still, if Microsoft truly is reimagining Windows the way they claim to be and if their business customers buy into their new story, perhaps running Dynamics CRM on Safari won’t seem all that exciting anymore this time next year.