During Convergence 2011 Atlanta we already heard the first pieces of news about an upcoming change in the release cycle of Microsoft Dynamics CRM product versions. Now we have the updated Statement of Direction May 2011 whitepaper in our hands and it lays out a roadmap for more rapid delivery of new features into both CRM Online as well as on-premises and partner hosted instances.

What has now been labelled as the agile release model for Microsoft Dynamics CRM will mean that an update/upgrade to the core platform will become available every six months. Contrast that to the previous 2-3 years in between major releases and you can see it’s no minor readjustment but rather a whole new way from the Microsoft Dynamics team to deliver products to the business users.

Funnily enough, the SoD whitepaper claims that CRM 2011 is the fifth major release of the product. While it goes by the 5.0 version number, I guess some of the folks in Redmond have already forgotten that there never was a CRM 2.0 realease, rather we saw the version number incremented from 1.2 to 3.0. Oh well, time flies when you’re having fun working in the field of CRM, so let’s move on…

The new release cycle is of course a direct result of the Cloud Power in action. No longer can you spend years in designing and developing features for your new product behind closed doors, even if you are Microsoft. Cloud applications have taught us consumers into living in a world of perpetual beta products that constantly get updated with new functionality, without any effort required from us to physically upgrade the apps. If Google can do it for Gmail, then why would the enterprise users settle for working with a standarized XP/2003 toolset for almost a decade? In the scheme of CRM, if you’re competing against Salesforce.com that has a monthly release cycle (or so I’ve heard), delivering a huge box of new features once every three years (which is what 2011 does offer over 4.0) means you’d have to actually keep three years ahead in terms of development, just to avoid slipping behind your competitor again. Doesn’t quite sound like a winning strategy.

During the CTP and Beta phases of the Dynamics CRM 2011 release process there were many times when I found either myself or someone else on the forums & blogosphere expressing their thoughts along these lines: “these new features are really awesome, but I just wish the small details of X and Y could be included before RTM, so I can really truly make the most of the product”. In the world of the old release cycle, hearing MSFT representatives reply back with the words “thanks, we’ll try to include it in v.Next” didn’t give much comfort. If the next version was three years away, it’s effectively the same as “forget about it”, if you contrast it with how fast the world of applications keeps turning these days. Facebook grew from 10 million to 310 million active users during a timeframe like that.

Smaller packages of new features twice a year should definitely help Microsoft fill the gaps in product functionality that inevitably appear whenever a big release deadline approaches and planned features have to be dropped to meet the real life requirement of shipping a release. At the moment, Dynamics CRM 2011 is lacking some functionality on three distinct areas that the Statement of Direction says will be addressed in upcoming versions to be released within one year:

Dynamics Marketplace will also presumably play a role in addressing some of the needs that don’t quite fit into the core product delivered by Microsoft. The accelerators that we saw released for CRM 4.0 were nice proofs of concept, but they weren’t proper add-on products that could have been deployed by the end user organizations without customization and development services provided by MS partners. The solution management framework included in CRM 2011 will make the distribution of apps much easier and I would expect to see development also on the Marketplace functionality as a channel for app delivery (eventually commerce). When the base platform of Dynamics CRM is built on one single product edition (meaning no separate standard/enterprise or sales/service versions), modularity is enabled throug the solution packages. While the verticals will likely remain a partner driven domain, I’m expecting to see some interesting releases coming from Microsoft Dynamics Labs as well.

The single codebase in Online and on-premises versions is a critical requirement for Microsoft to be able to pull off the planned schedule of shipping packaged software every six months. It will be interesting to see how the on-premises customers will adopt these updates into production use, and more specifically, how will they handle the annual upgrades. Here’s how the Statement of Direction defines the terminology:

Updates deliver new capabilities to Microsoft Dynamics CRM deployments without requiring a full upgrade. Upgrades may deliver deeper functionality enhancements and improvements, may incorporate significant Microsoft platform innovations (e.g. the next releases of Windows Server and desktop, .NET Framework, SQL Server, Office), and will have their own Microsoft support lifecycle for mainstream and extended support.

So, it looks like there could be a major release like a CRM 2012, CRM 2013 etc. every 12 months that can require an upgrade project to be conducted, similar to how current CRM 4.0 customers now need to plan for their strategy for moving to CRM 2011. For the IT department this means answering questions like: 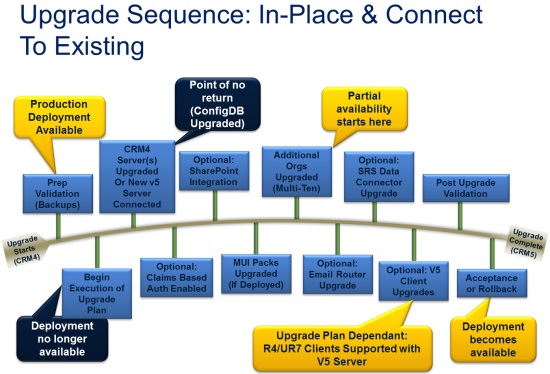 Another aspect to consider is how much further will the legacy code and API’s from previous versions be supported from now on. CRM 2011 does have backward compatibility with CRM 4.0 plug-ins and the 2007 endpoint for web services (see the SDK for code upgrade instructions), but CRM 3.0 callouts or endpoints will no longer work in CRM 2011. What about in Q2/2012 when there will be a new version available? If you choose now to take the easy way out with your 4.0 to 2011 upgrade and not touch any of the existing custom code in your system, will you face problems a problem in 2012 when the backward compatibility might no longer cover 4.0?

Of course it is perfectly possible that the Dynamics CRM platform itself has now reached a level at which there will be less needs for disruptive changes introduced between major releases. If we would summarize the road already travelled, the extremely high level timeline of Microsoft Dynamics CRM platform development could be described with these bullets:

So, is the platform now “ready”? Of course it never is, but compared to the situation in 2005 when I first started working with Microsoft CRM (before the Dynamics brand was introduced), I have to say it’s truly come a long way. The building blocks we now have available as results from these previous releases could be seen as the catalyst for why the new agile release model has become possible in the first place. Together with the cloud delivery model of CRM Online, it looks like the evolution of business applications is about to accelerate like never before.