Things used to be simple back in 2005 when I started working with Microsoft Dynamics CRM (known as only Microsoft CRM back then). You pretty much knew that there would be a version update every 2-3 years. In between, there would be a number of hotfixes created to address software bugs, which were packaged as “Update Rollups”. CRM 3.0 received in total three such packages. CRM 4.0 things kicked up a notch as we started getting these Update Rollups (UR) based on a regular schedule, one update every 2 months (until they were put on hold after UR21). CRM 2011 adopted the same UR release schedule, but in addition to that, Microsoft announced that they would adopt a new agile release model.

Exactly one year after the announcement we find ourselves in situation that may seem quite confusing to the casual observer. There are new releases in the horizon on a continuous basis and it’s easy to lose track of what exactly is meant by which update. Well, here’s my shot at explaining what’s going on.

R8 means Release 8. OK, so what are the previous seven versions then? They don’t refer to CRM 1.0, 1.2, 3.0, 4.0 or 2011 (there never was a 2.0, as some of you will remember). This R-based naming policy comes from the CRM Online product, which used to have its own release schedule with no UR’s and a slightly different code base from the on-premises product. The first R was presumably released when CRM Online was announced in April 2008. Things changed when Microsoft Dynamics CRM 2011 was released on January 15th, 2011, after which both the Online and on-premises version have pretty much gone hand in hand.

The “Rx” naming signifies a new functionality release and should never be used to refer to Update Rollup versions. Don’t shorten UR8 to R8, because the two are not the same (even though they are intertwined as we’ll later see). The Update Rollup version numbers always start from 1, so there’s been an Update Rollup 1 for both Dynamics CRM 2011, CRM 4.0 as well as CRM 3.0. Makes googling for information all the more merrier, eh? The Rx releases are a product of the cloud era and until we reach the next era beyond cloud apps, I don’t expect Microsoft to start the numbers from R1 all over again.

Since it would have been confusing for on-prem customers to first release Microsoft Dynamics CRM 2011, then follow it up with a “Release 7” all of a sudden, Microsoft decided to come up with a different naming policy for these new, agile releases. Unfortunately, the naming policy they chose gave us monsters like “Microsoft Dynamics CRM 2011 Q4 2011 Service Update”. Wow, how catchy, and only 50 characters long! As a result of this, what was originally supposed to be just internal jargon became the preferred option for human communication and we learned to know the update as R7. 50 vs. 2 chars, which one would you expect to fly in the age of Twitter? ‘Nuff said. 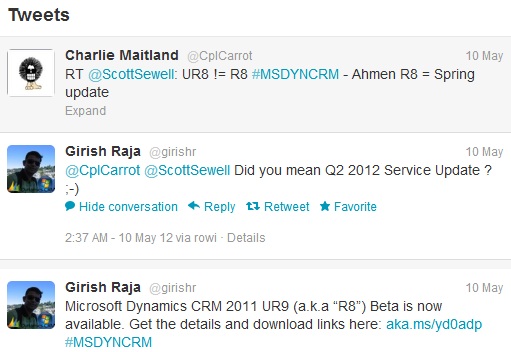 Most of you must surely be already familiar with the contents of R8, the next release, and if you’re not, here’s a link to the Release Preview Guide. The real catch is in how the promised new features will actually be delivered. The correct answers to this question are:

What will the Update Rollup 9 contain?

The official release announcement of Q2 2012 Service Update will most likely coincide with Update Rollup 9. However, if you study the contents of the Guide, you’ll find features that have already been released before UR9. Rapid View Forms were introduced in March as part of UR7 and re-labelled as Read-Optimized Forms. The same is true for SQL Server 2012 compatibility.

As we know from the previous R7 release, Activity Feeds are delivered as a solution package that you will need to download from the Dynamics Marketplace and configure manually. The Activity Feeds solution is not a part of the “core” Dynamics CRM product. However, there are parts of it that have been built into the platform, which is why at least Update Rollup 5 is required in order to install the solution. Similarly, you will need to get an updated version of the Activity Feeds solution after installing Update Rollup 9, otherwise you won’t see the new features.

A key deliverable of Update Rollup 9 will be the cross-browser compatibility that makes Dynamics CRM available on Chrome, Firefox and Safari. Since this is such a significant change to the platform, Microsoft has been kind enough to grant access to the R8 beta release for anyone who’s willing to follow these steps. Please note that the beta bits available for download cannot be upgraded to the final release of R8, so use them in a test environment only.

Extended browser support is completely separate from the mobile device support promised in R8. While you will be able to run CRM on an iPad Safari browser, the mobile UI demoed by Microsoft in numerous occasions is only available as 1) a subscription service from Microsoft, if you’re running Online or IFD, or 2) a perpetual license to be purchased from CWR Mobility if you intend to host the required service on your own server. Trying to access your Dynamics CRM environment after UR9 installation with an iPhone will most likely just give you the simplified Mobile Express user interface already familiar from the CRM 4.0 days.

Oh, and do note that the Microsoft Dynamics CRM Mobile released for Windows Phone 7 back in Q4 2011 Service Update is a completely separate product, even though it carries exactly the same name as the new offering developed by CWR Mobility and later on re-labelled by Microsoft. Since CWR Mobility didn’t have a Windows Phone client, this mobile app will likely remain on a separate development roadmap from the CWR-based offering.

If you haven’t seen the cool drag & drop report designer or the animated bubble chart demo of Power View, take a look at this video:

Wow, wouldn’t that look nice on a Dynamics CRM dashboard! Well, even though Power View is listed as one of the R8 features, there’s a couple things you should know:

The pre-configured Power View templates promised in R8 will be delivered as a Dynamics Labs solution, probably as a download from the Dynamics Marketplace. The same goes for the PowerPivot models to be included. Note that if you want to publish these PowerPivots to your organization, you’ll need an on-premises SharePoint Server 2010 with Enterprise CAL’s to view their contents on a browser window in your intranet.

In addition, if you plan to use SQL Server 2012 for hosting your Dynamics CRM database and Reporting Services, it’s good to know that you can’t achieve this configuration with the RTM bits for Dynamics CRM 2011. Update Rollup 6 has established a new baseline for CRM and you’ll need to download the server installation files from Microsoft Download Center, otherwise you’ll run into the following error while trying to install the Reporting Extensions:

What time is Metro? 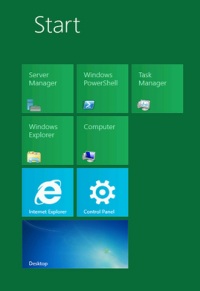 Putting things into perspective, Dynamics CRM is a small fish in the tank compared to the big whale that is Windows 8. Since R8 will be out well before Windows 8, there isn’t yet a 100% support provided for the Internet Explorer 10 browser provided with it. Hopefully the remaining issues will be addressed by upcoming UR’s as Windows 8 is nevertheless just around the corner. Presumably we’ll see a proper Metro app for Dynamics CRM once R9 is released later this year. After all, the Windows RT tablets will not be able to run Outlook and we’ll need some solution for activity tracking to and from CRM.

When it comes to Windows Server 8, official support has not been announced. However, that doesn’t mean you couldn’t install Dynamics CRM 2011 Server on a Windows 8. Daniel Cai has done just that and offers a tutorial for anyone wanting to test R8 on the very latest Microsoft products available.