There were a couple of announcements made regarding the upcoming version upgrade of Microsoft Dynamics CRM (previously known as “Orion”) during the World Partner Conference 2013 event (WPC13) three weeks ago: 1) it was named as “Microsoft Dynamics CRM 2013 / Microsoft Dynamics CRM Online Fall ’13 (depending on your deployment model) and 2) the client licensing model was unified between Online and on-premises to consist of Professional, Basic and Essential license tiers. The CRM related sessions also presented several interesting facts about where Dynamics CRM is heading (see my WPC13 recaps of Day 1, Day 2 and Day 3 if you missed them), but all in all they were more about the product roadmap rather than detailed features of the next release. 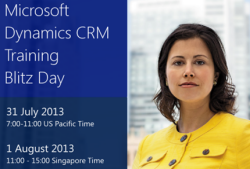 Today, on July 31st, Microsoft held the Dynamics CRM Training Blitz Day for all its partners. The sessions were split into two tracks, but for most of this blog’s audience I’m sure the track “Technical Overview for Application Consultants, Presales Consultants and Developers” was the preferred choice. The sessions presented by the Redmond allstars Eric Boocock and Girish Raja consisted of the following topics:

If you’re a Microsoft partner and have access to the event site, you really need to schedule some time for going through the recordings and other content available, because this is effectively the “What’s new in Microsoft Dynamics CRM 2013” training kit that summarizes the new and updated features of the product you’ll be working with from Q4 onwards.

Although this was a partner event, it was declared “free to tweet” and resulted in a wealth of content being shared over on Twitter. I collected the most interesting content related to new features of CRM 2013 onto a Storify post that you can view below, to get a quick overview of what was announced in the Blitz event.

There will surely be more material made available to Dynamics CRM customers shortly, so that they’ll have a better understanding of what it means when they see the update notifications in their existing CRM Online instances. If I’d have to summarize the CRM 2013 release highlights in five bullet points, they would be:

As with most new things, there’s a great deal of excitement I have towards the CRM 2o13 release based on what I’ve seen, and at the same time a healthy sense of fear on “is it all really going to work”. Lucky for us, we can now seek validation for the excitement and relieve our fears by patiently waiting for a public beta to become available (if ever). Yes, the beta link shared by the CRM team previously was apparently not meant to be made available publicly, so you’ll still need wait for a while to get your hands on the latest version of Dynamics CRM.

When will the actual Dynamics CRM 2013 product be released then? Many sources are pointing to The Partner Connections Event starting on October 20th as being the official launch event. Also many CRM Online customers have already received information on their organizations having been scheduled for updates to take place during Q4 2013, so I think it’s safe to assume this to be the time frame for general availability of the next version of Dynamics CRM.