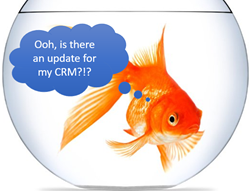 Spring is in the air, at least if the Dynamics CRM 2016 Spring Wave announcement is anything to go by. It’s pretty amazing that only 2 days after we were given the 2016 update for our CRM Online environment there’s already the next batch of updates to pay attention to. Now here I was thinking about spending some time experimenting with the new v8.0 functionality like the Interactive Service Hub or Knowledge Articles and OH, LOOK, A NEW RELEASE WAS ANNOUNCED! (Welcome to my goldfish bowl…)

Another thing that further contributes to the growing inability to concentrate on just a single CRM version at a time is that, well, there aren’t really any proper versions anymore. Sure, there are still official announcements regarding the major (Fall) and minor (Spring) releases, but it’s not like there would be a single point in time when the product bits become available for you to download. To a certain extent they still do, for the type of software that’s shipped as bits on MSDN, but if you’ve been working with Dynamics CRM for a while you might have found yourself thinking “all the fun stuff’s in the cloud”. I certainly have, and I don’t even see anything wrong with this, because pulling off this type of continuously updated application delivery is in practice only really feasible for customers when it’s consumed purely as a service.

By the time the CRM 2016 version became generally available, as in new CRM Online trial orgs were provisioned with v8.0, there was a slight feeling of “meh” when you discovered that most of the coolest new features touted in the Release Preview Guide were actually not yet there. No Mobile Offline, no Voice of the Customer surveys, no Relevance Search, no External Party Access… Many of the features being developed didn’t appear to have made the release train of v8.0 and were instead moved to what seemed like a Plan B, meaning rolling them out in limited Previews rather than the big fanfare of the GA. This would have been quite controversial back in the days of “one release every three years”, but these days it’s not really such a big source of concern at the end of the day, because there is no “gold master” disc to signify an RTM product anymore. 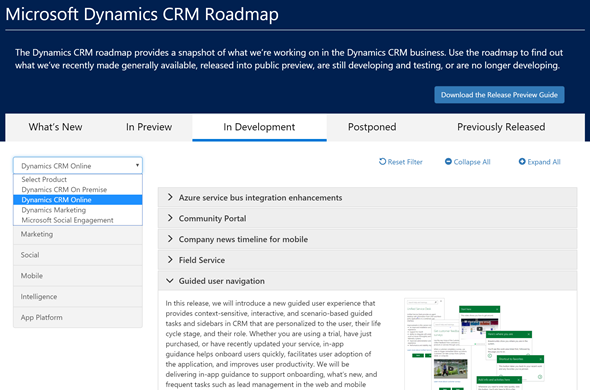 Recently Microsoft released an official Roadmap site for Dynamics CRM, which may be a small step for content management but a giant leap for the release policy around the CRM product. Following on the footsteps of many other MSFT product teams, like Office 365, this further moves Dynamics CRM into the service delivery model as the traditional product versioning gets pushed behind the scenes and the application functionality is brought to the forefront. Yes, the sysadmin will still need to be aware of the specific release that his or her CRM Online instance is running on, but from a business perspective this is becoming less and less relevant. New things will arrive in a continuous stream and the decisions for how to deploy a particular application functionality and what actions are needed for ensuring user adoption is an ongoing task for the persons in charge of making their workforce more productive and building customer facing processes that meet or exceed their ever going demands.

I guess it’s fair to say the world of CRM software reflects the bigger picture of how we the individuals are also operating when it comes to acquiring the things we desire: as a service. Instead of making big upfront investments in gaining the full possession of physical goods or property, our consumption patterns are increasingly leaning towards making a few clicks in an electronic environment and gaining access to the missing piece that will fulfill the needs we’ve identified. Our magic wands with wireless connectivity can be used to conjure up pretty much anything that you can imagine via a “buy now” button somewhere, almost at the exact moment you’ve thought of it. The end product may still be a physical package that gets delivered to your door, but the experience that the customer receives from your company is increasingly being evaluated against not how well the physical gizmo has been crafted but rather how well the various interactions around the customer lifecycle stages of information acquisition, financial transaction and ownership/service consumption are in line with the expectations that the customer had when he or she embarked on this journey.

Given that a CRM system is very much at the center of allowing a company to mange its interactions with existing and potential customers, it isn’t a huge surprise that software suites like Dynamics CRM are building up more and more advanced capabilities for managing the service processes that are increasingly turning out to be the real differentiators between companies. Yes, it’s still critical to have the necessary tools to manage the sales process and track your pipeline for accurate forecasting. Yes, capturing more data about the customer’s online activities is crucial for leveraging marketing automation to bring the right customers to your “buy now” button. These are all familiar territory for modern CRM system deployments, but based on my personal experiences from the field I’d argue that the most underutilized area for customer data and automated business processes can be found from the stage in the customer lifecycle where the selling stops and the service begins. In other words, the ball may get dropped at the point in time when it makes the biggest difference to the customer experience.

As the delivery of the actual end product for which the customer is paying is moving into the digital space from the earlier physical reality, there may be less arguments for why this part of the customer journey should be managed with a separate system. There are valid reasons why it’s never been a good idea to try and customize your CRM to assume the role of an ERP system for managing warehouses, configuring complex bills of material and these type of “hard” transactions instead of the “soft” interactions tracked in a typical customer relationship management system. I still don’t see it as necessarily a desirable future state for Dynamics CRM to turn into a monolithic enterprise app that has dedicated modules for controlling internal processes like payroll management. When it comes to managing the employees as resources for service delivery, however, this indeed looks like next step that Microsoft is looking to take with the Spring 2016 release. 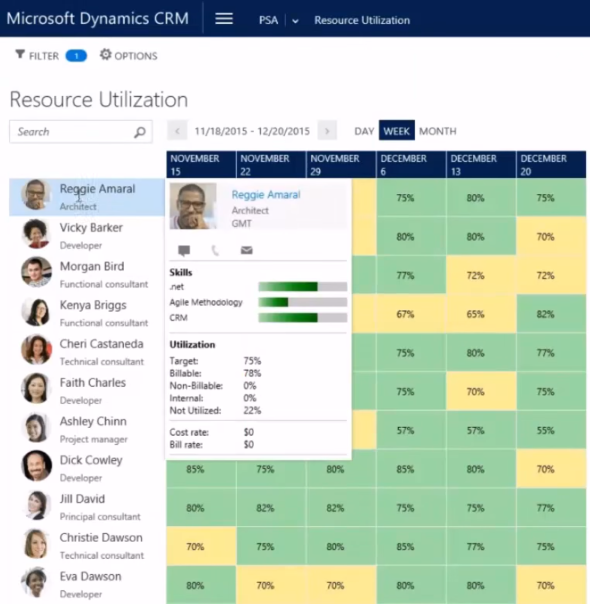 The integration of FieldOne into Dynamics CRM as the Field Service module and Adxstudio as the Portals module (or whatever the final terminology will be) is something that could already be anticipated based on the XRM based acquisitions that Microsoft completed last year. With the CRM 2016 Spring Wave announcement we now see that there are further investments being made to the service area with the Project Service concept. Shown as “PSA” (professional services automation) in the initial demo video, this looks to be much more than a mere V2 of the old service scheduling module  and is promised to have a shared resource pool and schedule management functionality with the Field Service module. Knowing that there’s already an explosion of new entities introduced by the preferred vendor solutions currently offered by Microsoft for CRM Online customers, it’s certainly important that some effort would be put into refactoring the data models of the several different application packages, to reduce redundant features exposed to the system users and customizers.

How far the PSA capabilities of the OoB Dynamics CRM product will be taken in the first version to be released in Q2 2016 (Dynamics CRM “Naos”, a.k.a. v8.1) remains to be seen, but it’s quite obvious Microsoft has decided to make big bets on the service story around Dynamics CRM. The XRM platform should offer a much better configuration and extensibility story compared to having these business applications built on top of some framework with less options for customers to adjust the details of the business processes to fit their needs.

While we wait for more  information to be shared about what functionality the next next release offers and how the licensing model around the new modules will be structured, why not take a look at the latest materials released by Microsoft, compiled in this Sway presentation I’ve put together.