As a part of the CRM Online Polaris update and the on-premise Update Rollup 12, new functionality has been added to the Activity Feeds solution. In fact, it’s no longer a separate solution but rather converted into a part of the Default Solution during the upgrade to Polaris / UR12 (see this YouTube video for details). Yeah, I know you were thinking that Activity Feeds are on their way out as the Yammer integration arrives, but the reality is that the auto posts functionality will still remain a CRM platform component, although the data itself may be presented through the common Yammer UI.

We’ll see how it goes in practice once the Yammer integration arrives in February (hopefully for on-prem, too, although no official info on that yet), but we’re already free to explore the enhancements of the updated Activity Feeds. In addition to the great new feature of being able to filter the records from where posts are shown in your feed instead of having to go and follow each and every interesting record, there’s also another important addition: the support for organization owned entities. Previously you couldn’t add the Record Wall onto entities like competitor but now such limitations have been lifted.

Another interesting entity that could well benefit from the Activity Feeds style of presenting the latest updates is the queue entity. Although queues themselves are a useful feature for process automation and routing tasks between users, their usability in the out-of-the-box configuration of Dynamics CRM is fairly poor. Unless you’re a full time service rep working on queues, it’s not a very intuitive way for monitoring work to be done and who’s working on what, let alone getting notified of something added into a queue that you should do something about. 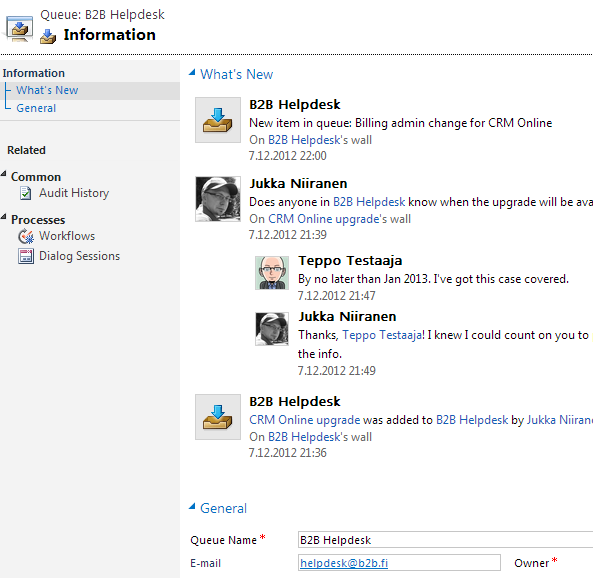 Enter Activity Feeds. With the ability of having the actions in queue item updates being reflected in a timeline that allows people to also comment on the progress of these items, all of a sudden the whole queue concept can become a lot more accessible to casual CRM users. Following the relevant queues you want to receive updates from is as easy as following your teams’ accounts, and with the new filters in Polaris/UR12 update there’s even more possibilities for creating views of only specific types of queue items.

There are no standard post configuration rules available for the queue or queue item entity, so you’ll have to build the auto post rules by using workflow processes. Although the users will prefer to follow queues and not queue items, what you as a system administrator or customizer will want to do is create workflow rules for queue items and reference the related queue as a regarding object. This will allow users to see Activity Feed posts when new items are added into queues they are following, when their “worked by” information changes etc. 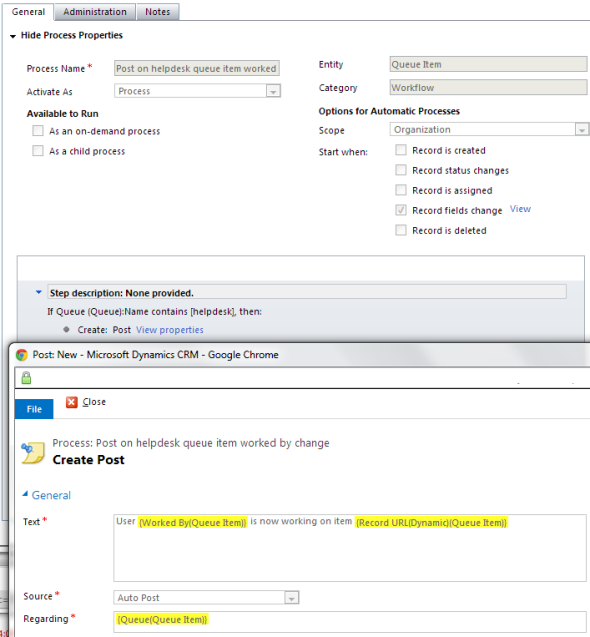 With the new social dashboards introduced in Polaris, it’s ever more likely that users will encounter the What’s New section when logging into CRM. Why not make the most of this and configure a few new rules for creating auto posts that surface relevant and interesting information to the users on what’s happening with the various processes that Dynamics CRM is used for managing? 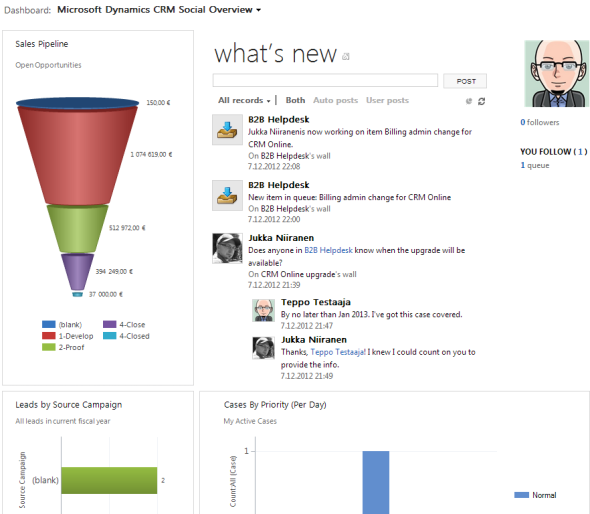