My favorite podcast by far is CRM Audio. In fact, it’s the only podcast I regularly follow, since whenever I put my headphones on, quite often it will be for playing something from Spotify or Mixcloud to keep me from being distracted by people talking around me. Anyway, the podcasts that Joel, George and Shawn record about the latest news from the Dynamics CRM world together with their guest stars always provide some interesting insights that you can’t catch from the blogosphere. If you haven’t subscribed to it yet, I encourage you to give it a go.

In episode 21 of CRM Audio, titled “That’s Not A Survey”, these CRM tipsters explored the brand new Voice of the Customer solution and discussed how to position it in relation to other tools like ClickDimensions Surveys and the likes. As you may have noticed from my previous blog post, I’ve also spent a bit of time playing around with VoC, since I see quite a lot of potential with this XRM based survey engine.

One of the misconceptions around VoC that I’ve come across a few times before was also mentioned in the podcast was about conditional questions in a survey. It’s quite a basic requirement from any more advanced online surveys that the remaining questions should be adapted based on the earlier answers that the user has given. Call it “skip logic” or conditional show/hide, this would be something that a well designed survey would often need to apply, so that it adapts to the customer’s scenario being studied and can branch into different directions if parts of the questions are not relevant in a particular path. The misconception here is that in the Voice of the Customer survey designer UI there doesn’t appear to be a way to define such conditional logic. However, VoC does have this functionality already today.

Being a very recent addition to Microsoft’s portfolio, and having been delayed from the original CRM 2016 release schedule, the features of VoC aren’t very well documented at the moment, nor is there much training material available for instructing users how to get familiar with the tool. The regular readers of Surviving CRM might recall that VoC was actually called Mojo Surveys when MS acquired it one year ago. This means that documentation does exist, but it just hasn’t been remade into Microsoft’s format yet. Here’s a little tip: Google for mojo surveys filetype:pdf and see what you’ll find…

How the “skip logic” is done in VoC surveys is via a feature/entity called Response Routing. Found from the related records menu under a survey record, this is where you can define both the response conditions under which the routing  should take place as well as the response actions that should be carried out when the conditions are met (or not met). A condition would be associated with the response given to a particular question and evaluated via “equal/greater/less” type of operators. Below you see a simple example of a single condition per response routing, but you could also group multiple conditions together via AND/OR operator. 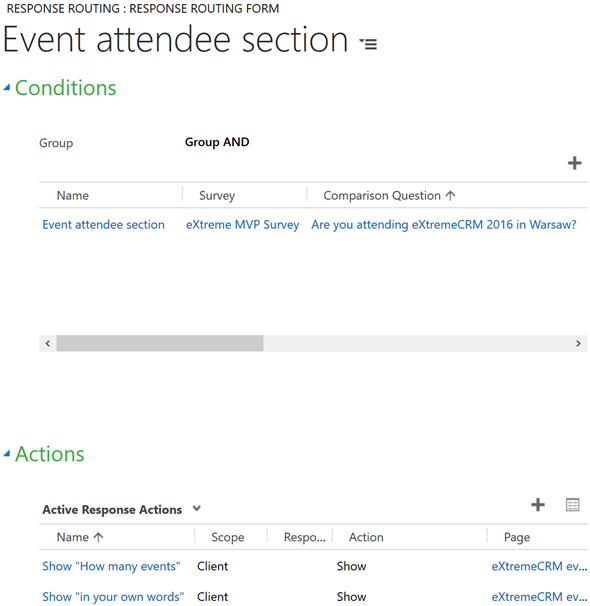 The actions that you can take based on the conditions are split into two categories: client and server. As you may guess, the client side actions are performed during survey runtime, similar to client side scripts on CRM forms. Server actions are not performed until the survey response is submitted into the CRM database (like plugins), at which time it will be too late to affect what questions were presented to the user. So, the most interesting actions will be client side, which allow us to determine show/hide actions for questions or sections of a survey page, skip to a specific page, end the survey or even direct the user to a whole different survey. 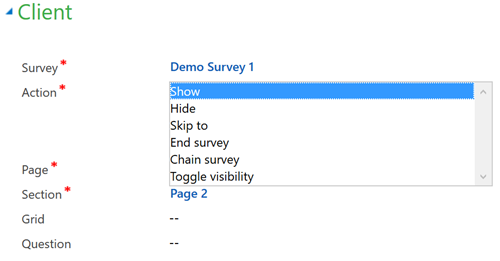 In the example of the eXtremeCRM MVP Survey which I published together with my previous post, I added a Response Routing on the page 1 question “are  you attending eXtremeCRM 2016 in Warsaw”: 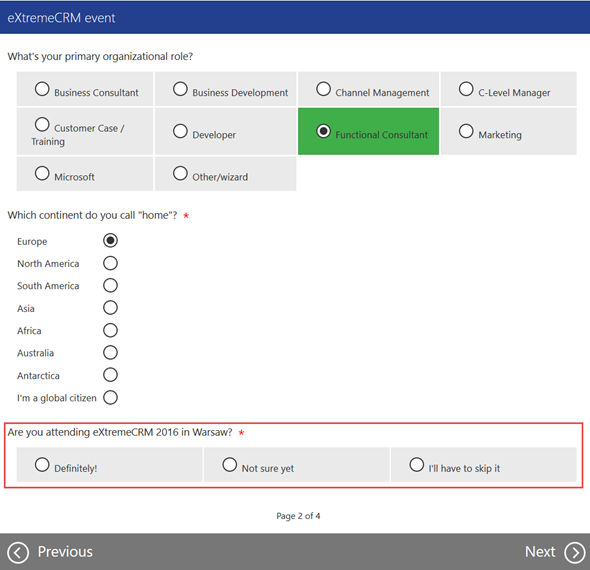 If the user selects the answer option “Definitely!” then a further set of three questions will be revealed underneath that question on the same page. Similarly, because I also built response actions for the reversed scenario, if they change the answer value and click “I’ll have to skip it” then these additional questions are again hidden in real time on the survey page. 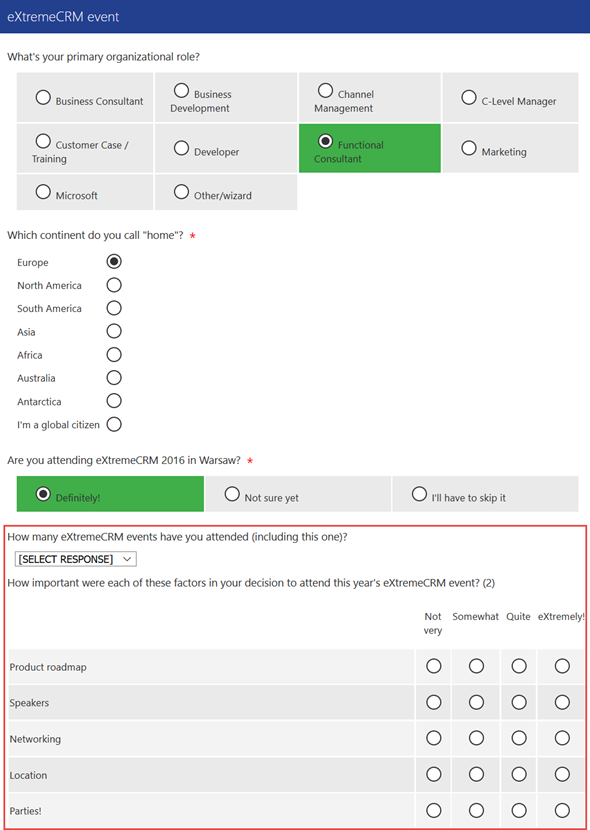 As you can see, VoC does already contain quite nice functionality in the first version that’s been released now. There are many more features to discover, such as piping dynamic data fields into surveys, so let’s hope that Microsoft will publish tutorials that showcase the real potential of these VoC surveys – not to mention the possibilities of what you can do with the response data as it flows into your XRM environment! 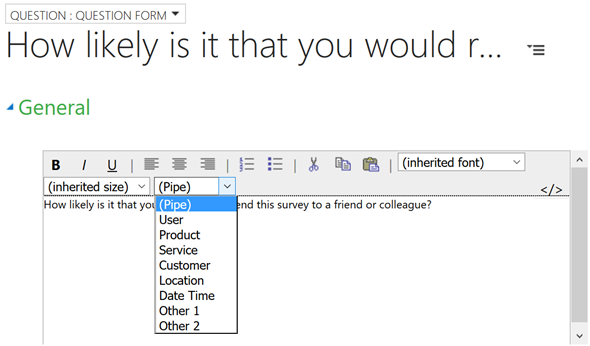 One word of warning is in order here: currently there’s a known issue with the Voice of the Customer solution that will break the CRM v8.0 OData feeds (the new OData v4 endpoint) if you install it into your environment. If you then try to build a report with Power BI Desktop and want to use CRM Online as the data source, you may run into an error dialog saying “The field ‘regardingobjectid_msdyn_surveyresponse’ already exists in the record.” Microsoft is aware of this bug and is working on a fix, but if you are relying on Power BI for your production CRM Online reporting, then it’s maybe better not to deploy VoC outside of your sandbox environment just yet.

Speaking of Power BI, to end on a positive note, did you happen to catch the news from last week’s Microsoft Data Insights Summit? If not, then be sure to check out some of the highlights from this Sway presentation where I captured the best #MSDataSummit tweets. Pretty awesome new features coming from the Power BI team that will surely be useful for anyone who wants to do analysis on their CRM data – be it the familiar sales pipeline metrics or the new scenarios like customer satisfaction survey results enabled by the Voice of the Customer XRM solution.