Microsoft has released a YouTube video where Ruben Krippner talks you through the upcoming features of the Q2 2012 Service Update, a.k.a. Dynamics CRM R8. Since we already know much of the new release details through the Release Preview Guide, the most interesting part of the video is the live footage of Microsoft Dynamics CRM Mobile running on an iPad. For those of you who want to get a quick glimpse of what the client looks like, I took the liberty of taking a few screenshots from the video. 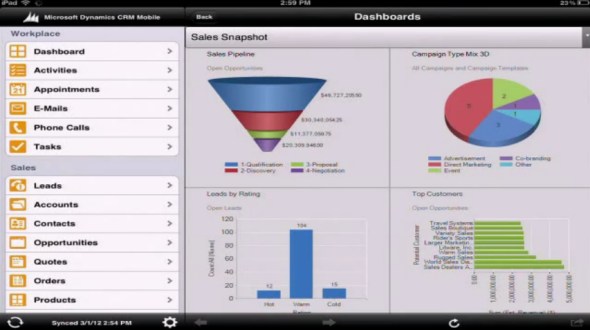 As we know, the “new” client is actually a rebranded version of the CWR Mobility client for Dynamics CRM. The UI looks almost identical, apart from a new set of Metro style entity icons. The sharp edges and “authentically digital” appearance look somewhat out of place in the otherwise iOS-style app, but let’s hope that there will be a full Metro app for Dynamics CRM available once the Windows 8 tablets hit the stores.

Dashboards appear to be close to the web UI as far as charts go. If you have other types of web resources on your dashboard (say, a Silverlight component), the results may be a bit less so. Also, I’m assuming entity grids will not be rendered on the iPad Dashboard, at least not in their original format. 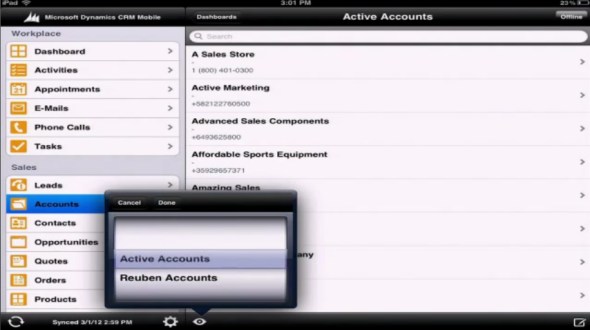 The iPad UI does support filtering data through views, just like you do on the web client. However, the views themselves will not be presented in the familiar grid style with columns, rather you’ll see a list of records with the primary field and some other data stacked on top of each other. Whether this is because of iOS limitations or an inherited design from the iPhone app, I’m not sure. 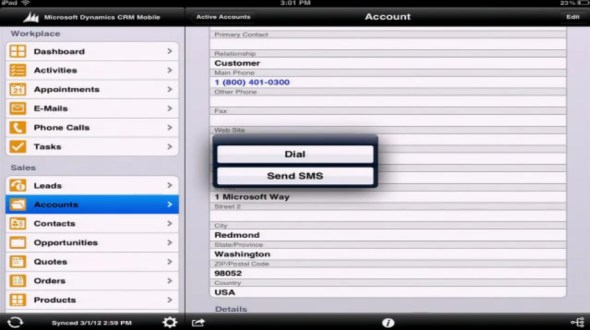 The standard fields are presented on a form that has a single column. Picklist and date fields use native iOS controls, also field types like phone numbers or email addresses will open native apps for respective actions. Why an iPad app shows you the options to dial a phone call or send SMS, I don’t know, because at least my iPad won’t allow me to do those without jailbreaking the device, but maybe Ruben has a special version of the Apple tablet 😉

As you can see from the form, it’s not specifically optimized for landscape mode viewing on a tablet, but rather looks like a big iPhone app. Entity forms with many columns will therefore be presented as a long list the user has to scroll up & down. 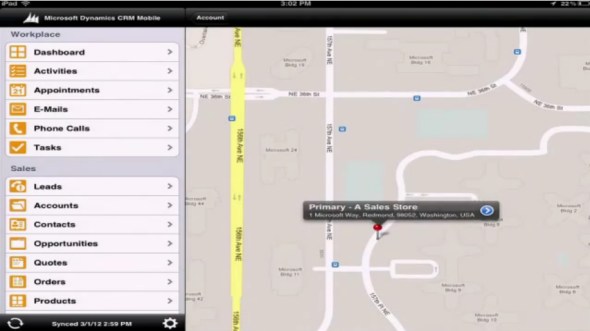 As a funny little detail that Ruben mentions on the video how the account address opens up on Google Maps. Why not Bing Maps? Well, because the native map application on an iOS device comes from Google…

Off-topic: It’s great that the mobile clients for iOS, Android and Windows Phone now have the basic address mapping integration in place, now we just need to get it for the web and Outlook clients as well. While the integration itself is technically quite trivial, the requirement for purchasing a Bing Maps license for using the map data on a non-public application is currently a big barrier in the desktop world. But enough about that, let’s get back to the mobile client. 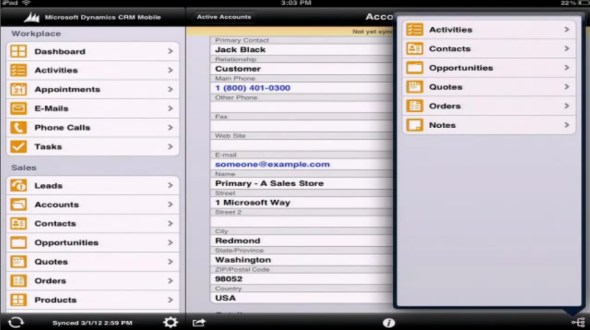 Because the sitemap navigation pane is permanently visible on the left hand side of the screen, which on a normal web client entity form would show the related records, in the mobile client these are accessed through a button on the lower right corner of the screen. Subgrid type of functionality is not available on the tablet UI, which can make it a bit cumbersome to navigate through long hierarchies of records. As a result, using the iPad client for tasks such as order entry while on the road is not really optimal in the Microsoft Dynamics CRM Mobile client. These types of use cases will still be better met with a custom developed tablet application equipped with specific data entry screens, so toolkits like Resco will remain relevant even after this official Dynamics CRM iPad client gets released.

The mobile client is not just an alternative UI for CRM, but there is a wealth of management options for user and client management, synchronization settings, usage reports etc. Since the way you use a mobile/tablet application is quite different from the normal desktop client usage scenario, it’s important that the information presented to the user can be optimized. Microsoft Dynamics CRM Mobile allows you to do this by defining different user groups and assigning them tailored mobile profiles containing only relevant entities in the sitemap. Also the contents of the mobile forms can be adjusted, so you don’t have to show all the tens of attributes that your entities contain. 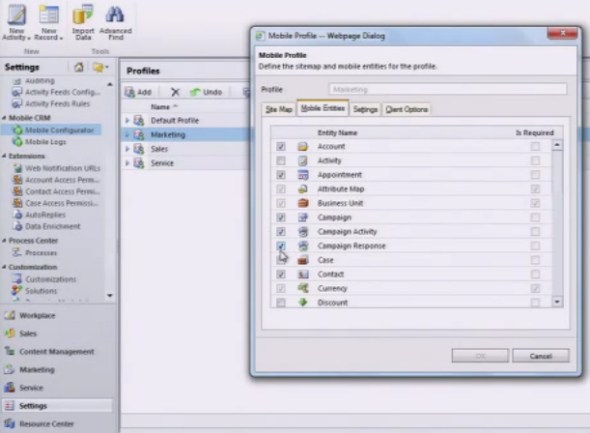 The CRM Anywhere theme is definitely a step in the right direction for Microsoft Dynamics CRM to become an application that truly “works the way you do”. Even though the cross-browser compatibility will enable users to open up the CRM web client on their iPad Safari browser, for any serious work on a tablet you’ll want to have a client that is optimized for:

For the subscription price of $30 per user per month (or the perpetual license you can still acquire from CWR Mobility), you can install a fully capable Dynamics CRM mobile client on both your iPad and your iPhone, and still have one user license left for trying out the latest Android phone (whether the non-offline Windows Phone 7 client will consume a license, I don’t know yet).

You can read more of my thoughts on Microsoft Dynamics CRM Mobile on this article I wrote after the announcement at eXtreme CRM 2012 Berlin.