It’s been a while already since Microsoft announced they were deprecating the Outlook Client for Dynamics 365. This announcement applied to the release formerly (and partially still) known as July 2017 Update, which everyone should rather be calling by its version number, i.e. v9.0. Since this version has only very recently become available for existing customers to schedule their CDU dates, it’s a good moment to remind everyone what this means in practice.

You’ve Been Replaced By An App

They all keep saying that robots will take away our jobs, but in the meantime it’s apps that are taking over Dynamics 365. Like I explained in my earlier blog post “What’s An “App” in Dynamics 365 Anyway?”, one of the many uses for the term “app” is now the way you integrate Outlook with your CRM system. Unlike the earlier COM add-in of Outlook Client for Windows PCs, this App will now work in any client environment – both in the browser and in mobile environments. That’s why the App is the future and the Client is the past. Well, actually that’s just one of the reasons, but let’s keep it simple for now, since the outcome remains the same nonetheless.

So, if we’re just getting more of everything then isn’t this the easiest thing to sell in the world? It probably is a no-brainer for the IT guys who’ve had to struggle with the installation, configuration and updating of the locally installed Outlook Clients for years, as the administration overhead is reduced significantly. For the real end users of the CRM system, the perspective may differ, though. A user will immediately see the things that work differently with the App than they did before. Regardless of all the improvements, it will mean changes to their personal workflow, which is why you should pay attention to how the replacement is communicated and what support the users will need in this process. 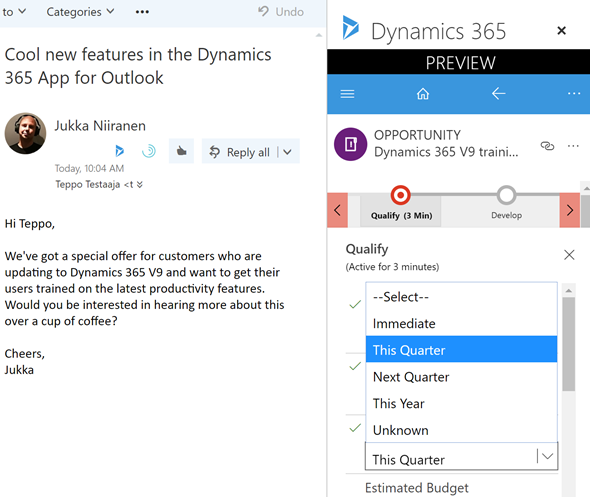 In your initial tests of the new features with a V9 environment and the App for Outlook, it’s good to keep in mind that this is still work in progress. The V9 Readme / Know Issues page has a list of technical glitches and unsupported environments for the App that is today still in Preview mode. It’s expected that by the time the current customers get their V9 updates the fully supported App version would also be available. Even with these hotfixes, you should prepare to see some usability gaps remain in the product for a while, as we’re dealing with a technology that’s fresh from the oven: the Unified Interface.

In The Name Of Unification

The Dynamics 365 App for Outlook is one step on the long road towards a Unified Client Infrastructure. The earlier v8.x incarnation of the App was a limited side pane that would show information about records related to the email while browsing your inbox. The V9 App is a miniature app module built on the same Unified Interface that will power all the Dynamics 365 Customer Engagement UI’s in the future. This means that the feature set available is far greater, with the ability for you to scroll through the entire contents of a contact form while remaining in your inbox – or even navigate to related records. Similarly the commands at your disposal will allow completing tasks like adding new competitor records into your CRM database from within the single UI. 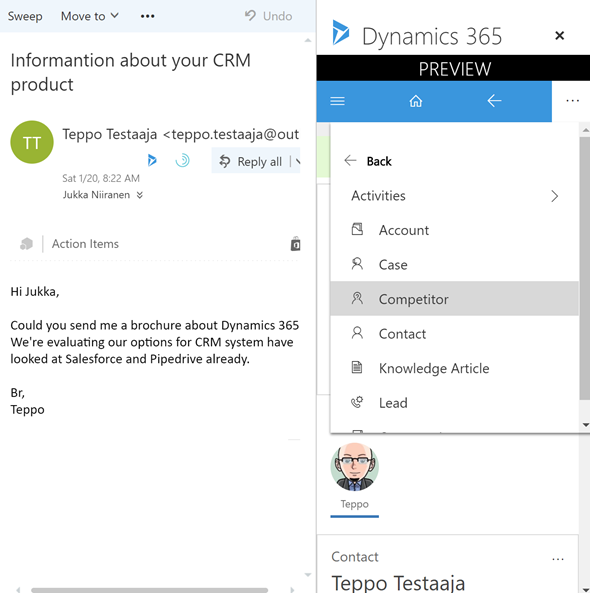 For anyone who’s used the Outlook Client mainly for tracking items from their mailbox, calendar or contact list into the shared Dynamics 365 customer database, this will surely seem like a big step forward in terms of the new contextual actions being offered. These users will have gotten used to opening a browser tab whenever they’ve needed to actually view and search the contents of the CRM database in full screen mode.

Then there is the group of users who’ve been in the Dynamics game for a longer time – at least from the CRM 2011 version. Back in those days the whole concept of Dynamics CRM might have been sold to them as “never leave your Outlook”. These people may not have actually seen a lot of the UX enhancements that have taken place in the browser and mobile clients in the past few years, since to them CRM has always looked like this: 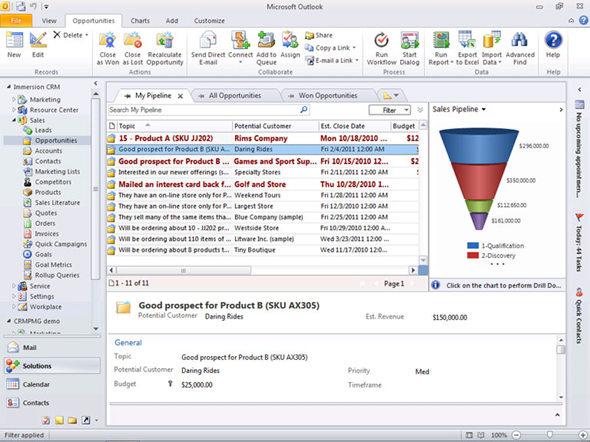 A “next generation Microsoft Outlook Experience” revealed seven years ago. Yeah, you probably wouldn’t buy a Customer Engagement solution today that looked like an ERP built into Office 2010. That doesn’t mean there wouldn’t be power users out there who still rely on the feature set of the trusty old Outlook Client to keep them productive, because they have mastered the Ribbon, the panes, the tabs, the whole shebang.

The End Is Near …ish

Microsoft has stated that by the time V10 rolls out, the client UI pictured above won’t work with Dynamics 365 anymore. That’s kind of understandable we consider that the Unified Interface will also replace the web client at some point in the future – possibly at the very same moment. If that is the case, we might not yet be all too close to the final removal of the Outlook Client yet. 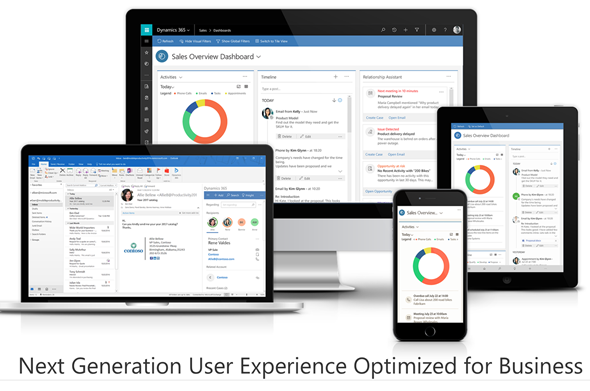 There’s going to be a lot of work needed before every last bit of legacy client infrastructure will have been replaced with the UCI based components. Microsoft remains committed to the guidance they’ve given to customers about the update schedule, which states there should be two new releases per year. However, we don’t really know much anything about at what point in time the next major release will arrive. Even things like rebranding Dynamics CRM to Dynamics 365 were handled over a minor update of v8.2, so who knows if we’ll see v9.1, v9.2, v9.3 etc. before the plug is finally pulled on the Outlook Client and (presumably) a whole bunch of other deprecated features in V10. 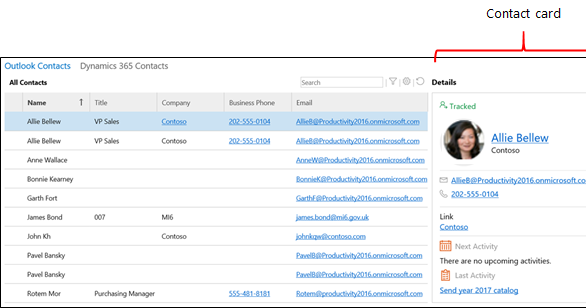 It also remains to be seen whether Microsoft intends to evolve the desktop experience of using Dynamics 365 Customer Engagement. For example, at the moment the documentation states that the offline functionality is available via the phone and tablet apps. The table app for Windows 10 could of course be used on a regular PC as well, but it’s not completely unrealistic to expect some more targeted client applications appear for the desktop environments. When it comes to the App for Outlook on a PC, the current version still installs an add-in to manage your contacts, for example. So, just because the UI controls are being unified now, this doesn’t necessarily mean we’d be forced to use an “oversized phone app” on our big monitors.

No More Updates – But Don’t Forget To Update!

Even though the Outlook Client is now deprecated and there will not be any feature enhancements made to it, that doesn’t mean it would be completely left to rot. In fact, it is very important that once your Dynamics 365 Customer Engagement instances moves up to V9 also your Outlook Clients are using the latest version. This version is now the 8.2.2.137 Update for Dynamics 365 for Microsoft Outlook, available for download here. Yes, it’s V8 and not V9, but don’t let that mismatch distract you.

You see, with V9 the XRM platform has moved up to using TLS 1.2 protocol for securing the connections between the clients and the server. The earlier Outlook Client versions do not support TLS 1.2 and the V9 server will not accept anything but 1.2 as the cryptographic protocol, which means you’re going to need the latest bits. If you have developed your own clients or code that relies on an earlier TLS version, then be sure to read this in-depth description provided by Matt Barbour of the possible errors you’ll encounter with V9 and the ways how you can avoid those by recompiling your code.

Against all odds, Microsoft actually decided that they would reverse their previous decision to deprecate the Outlook Client. Read the following blog post and draw your own conclusions: