The benefits of running your Dynamics CRM application in Microsoft’s cloud is that you don’t have to worry about installing update rollups to your server, since MS takes care of all that maintenance. The downside is that you can’t be sure when exactly the updates take place. As we’re coming closer to the expected release date of Dynamics CRM R8, it’s a good time to reflect on the past update schedules of CRM Online.

As of mid-June, CRM Online organizations are still running only the Update Rollup 5 version (at least on the EMEA CRM4 data center), while on-premises environments may already be running Update Rollup 8. No matter if you use an existing environment or sign up for a new trial organization, the version you get is 5.0.9688.1561. This corresponds to roughly the build number of on-premises UR5, which is 5.0.9688.1533, whereas Update Rollup 6 is 5.0.9690.1992 already. How can you check the version of your CRM Online application? Simple: on the browser client just click File – Help – About Microsoft Dynamics CRM. You’ll see version from the top of the pop-up screen.

So, where do I go to translate those ten digits into a human readable version name? For the list of detailed build numbers, related KB articles and other information, be sure to bookmark this page on the Dynamics CRM In The Field blog: Microsoft Dynamics CRM 4.0 and 2011 Update Rollup Release Dates, Build Numbers, and Collateral. That page is being updated as new rollups are released and it also has in the past contained projected release dates of upcoming updates as well. Has, since at the time of writing it no longer does. Also note that the CRM Online build numbers and release schedules can and will differ from on-premises, as we’ve already seen. 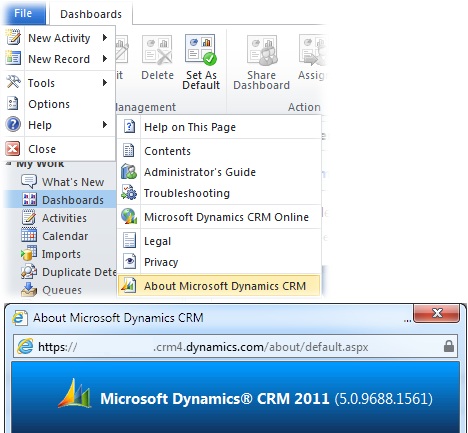 Back when Update Rollup 7 was released on March 22nd, the accompanying post on the CRM Team blog promised the CRM Online Datacenter update schedule to “Mid to Late April, 2012”. This was also the information on the related article KB 2600643, but things have changed since then, as now all the post UR5 KB articles read:

For online customers Infrastructure improvements are being made to CRM Online. Because of this, update rollups will not be applied to servers until the improvements are complete. Through the System Notifications page for the system maintenance window, you will be notified of when your organization will be updated to the new infrastructure. The latest updates will be applied at that time.

It’s no secret that Microsoft is working on bringing the Dynamics CRM Online and Office 365 clouds onto a single platform and unifying many of the surrounding components, such as subscription management or user authentication. This has apparently caused the planned schedules of Update Rollups to CRM Online get changed from those earlier communicated. When UR5, also known as the Q4 2011 Service Update, was released, it was deployed first to CRM Online environments before becoming available for on-premises and hosted environments. Since then we’ve seen UR6, UR7 and UR8 all get released to the on-premises environments first, with CRM Online remaining in the “UR5+” status for quite some time. Note that the builds are not exactly the same and there are likely to be differences in what the terminology means for different platforms. For example, UR6 brought support for SQL Server 2012, but we’ve already heard Microsoft say that CRM Online was running on SQL 2012 long before that.

What the current status of updates to the Microsoft hosted cloud means that CRM Online customers are not yet able to leverage enhancements brought in UR6-8, such as the read-optimized forms introduced in Update Rollup 7. Also any server side bugfixes and functional changes beyond UR5 must be assumed to be lacking from CRM Online organizations, although we can’t know for sure what may have been applied as hotfixes. For example, problems with connections not merging when deactivating duplicate records was fixed in UR7.

On the client side things are a bit different, since all the Update Rollups are rolling onto CRM Outlook clients through Microsoft Update. There is no longer a separate client version for Online and on-premises, so everybody gets the same hotfixes. Even though Microsoft recommends that the client and server Update Rollup versions should be kept close to one another, they don’t need to be identical. Here’s what it says on the CRM In The Field blog:

The general rule of thumb is to try to keep the versions in sync as much as possible. However, it is permissible (though not recommended as a long-term solution) to run mismatched Update Rollup versions on Outlook client and server, as Microsoft does do some testing of such combinations.

So, since the CRM Online version difference is obviously well known by MS, the UR combinations shouldn’t be an issue for Outlook users who’ve deployed the latest Microsoft Update packages. Even if you’re using the offline database in your CRM Outlook client, I assume compatibility between the CRM Online database has been taken into consideration. Of course in the field of IT, you should never assume anything, rather you should test any Update Rollups in a dedicated test environment, but smaller CRM customers may not always have that luxury. Which gets us to the following rule of thumb: don’t ever be the first one deploy the latest Update Rollup once it’s released. Wait a few weeks and check out the CRM forums and blog posts to read about the experiences other users have with the latest update, only then decide to deploy the update onto production devices (first onto your own test servers and clients, if you have them available). The Dynamics CRM community tends to be quite effective in reporting new issues that arise with UR’s, so leverage the wisdom of the crowd and save yourself from some unpleasant surprises.

The big question that many people are searching for an answer to is: when exactly will Dynamics CRM R8 / Update Rollup 9 / Q2 2012 Service Update be released? (In case that previous terminology trio made no sense to you, be sure to read my explanation of the “Dynamics CRM update & version madness”.) I wish we knew, but in reality only Microsoft has that information and it hasn’t been publicly communicated. We’ve got less than two weeks to go on the Q2 of 2012, which makes it a tight schedule to keep if also Online organizations would need to be updated in addition to releasing the on-premises bits. We need to remember that R8 is a very significant update due to the added cross browser support, which will surely keep many CRM developers busy with fixing legacy scripts, so any issues that the R8 beta program may have revealed certainly need to be thoroughly investigated and I’m glad if Microsoft is taking extra time to get the whole CRM Anywhere experience right with UR9.

Status update 2012-06-20: As reported on XRM Services blog, the US data center CRM Online organizations were updated to 5.0.9690.2174 on June 19th, which translates to Update Rollup 7+ but still a bit below the Update Rollup 8 available for on-premises environments. A similar update has been scheduled to take place on EMEA data centers one week later, on June 26th. Since it’s quite unlikely that there would be several maintenance breaks on consecutive weeks, this appears to indicate that at least for CRM Online customers the long awaited R8 release, also known as Microsoft Dynamics CRM Q2 2012 Service Update, appears to be delayed from the original schedule and now seems to become “Q3 2012 Service Update”. It is of course still possible that the on-premises bits for Update Rollup 9 will be released before the end of June.

Status update 2012-07-04: It’s Q3 now and we know for sure that the release of R8 has been delayed from Q2 2012. The service break for CRM Online on June 26th in EMEA didn’t actually bring any updates to the CRM application, but now there’s another maintenance break scheduled for July 11th. Since the US data center went from UR5+ to UR7+ in the previous round, this may just be EMEA catching up on the delayed Update Rollups.  I’ll update the post again as we see the results or hear announcements from Microsoft so watch this space.

Status update 2012-07-07: Finally we have a release date of July 19th for CRM Online. However, the “CRM Anywhere” functionality has been dropped from the update and will not arrive until six months later in Q4 2012. Read my analysis on the announcements from this blog post.